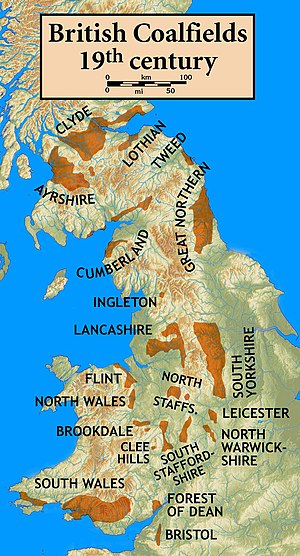 The North Staffordshire Coalfield is a historic coalfield in Staffordshire. It encompasses an area of nearly 100 square miles and that area is virtually wholly contained within the boundaries of Stoke on Trent and Newcastle under Lyme. There are three other smaller coalfields which are associated with the North Staffs field and they are the tiny Shaffalong and Goldsitch Moss Coalfields near to Leek and the Cheadle Coalfield. Coal mining in North Staffordshire was recorded as early as the 13th century by the monks at Hulton Abbey[1] but the industry grew during the Industrial Revolution when coal mined in North Staffordshire was used in the areas famous Pottery industry of the Potteries, and also the local Iron industry as ironstone deposits were also found with the coal in certain areas.

The heyday of the industry was in the period before the First World War when over 20,000 men worked in the industry and over 50 pits were in operation. After nationalisation in 1947 the industry was gradually reduced in size as the smaller pits were closed or merged with the larger, more modern mines. The industry began its final decline after the 1984-85 miners' strike and the last deep mine in the coalfield, Silverdale, was closed on Christmas Eve 1998.[2]

The superficial geology in this area predominantly consists of Devensian glacial tills, which overlie the Middle and Upper Pennine Coal Measures; the same sequences of sandstones, mudstones and coal seams as forms the impressive coalfields of Lancashire. The North Staffordshire Coalfield is a compact and heavily faulted coalfield,which is triangular and troughed like a saucer in its shape. However for its relatively small size it has an amazing number and variety of workable seams;[3]

Coal and ironstone were being dug in the Stoke-on-Trent and North Staffordshire area as early as 1282, and by 1467 the Great Row coal seam was being mined and used for firing pottery. The actual area within which the coal is exposed at the surface is 70 square miles, which is small compared to other coalfields, but along the central part of this the thickness of the seams is much greater than that of any other English coalfield except Lancashire.

The coal industry gradually expanded due to demand from the pottery and iron industry. It was also due to the establishment of the new transport system, canals (1777) and later railways (1837).

The coal industry went from private small owners to big group iron-master owners, to nationalisation in 1947, until the last deep mine (Silverdale) was closed in December 1998.

Most former colliery sites have since been reclaimed. Chatterley Whitfield, bordering Chell Heath, which was the first UK mine to produce more than 1 million tons of coal per annum, closed in 1976. Two years later it was reopened as a museum, dedicated to the local industrial heritage. This closed in 1991 and the site was declared a local nature reserve,[4] and a scheduled ancient monument by English Heritage in 1993.[5]

The Phoenix Trust, an independent not-for-profit foundation, is campaigning to turn the North Staffordshire Coalfield into a World Heritage Site due to its historic economic significance, leading role in the industrial revolution and role as the birthplace of Primitive Methodism.[6]