From Wikishire
(Redirected from Newcastle under Lyme)
Jump to: navigation, search

Newcastle-under-Lyme is a market town in Staffordshire. It is adjacent to The Potteries, the Staffordshire towns which became the City of Stoke on Trent. It is an old market town.[1]

Situated in a valley alongside the Lyme Brook, the town is immediately west of the neighbouring city of Stoke-on-Trent, its suburbs running into those of the city. Newcastle town centre is just 2 miles from Stoke-upon-Trent and less than 4 miles from Hanley, Staffordshire. Newcastle-under-Lyme is about 17 miles north of the county town, Stafford.

The Newcastle part of the name derives from being the location of a 'new' castle, built in the 12th century.[2] The "Lyme" section could refer to the Lyme Brook or the extensive Forest of Lyme that covered the area with lime trees in the mediæval periodThis is Newcastle-Under-Lyme Newcastle is named after a 'new castle' that was built in the area in the twelfth century. The 'lyme' part of the name derives either from the Lyme Brook that flows through the town or from the lime forest that covered a large part of land in the mediæval period..[2][3]

Newcastle is not mentioned in the Domesday Book, as it grew up around the 12th century castle, but it must early have become a place of importance, for a charter, known only through a reference in a charter to Preston, was given to the town by Henry II of England in 1173. The new castle was built to supersede an older fortress at Chesterton about two miles to the north, the ruins of which were to be seen up to the end of the 16th century.

In 1235 Henry III constituted it a free borough, granting a guild merchant and other privileges.[2] In 1251 he leased it at fee-farm to the burgesses. In 1265 Newcastle was granted by the Crown to Simon de Montfort, and subsequently to Edmund Crouchback, through whom it passed to Henry IV. In John Leland's time the castle had disappeared "save one great Toure".

The Civil War largely passed the town by, apart from a plundering raid by a Royalist force.[1] However, it was the hometown of Major Thomas Harrison a Cromwellian army officer and leader of the fanatical Fifth Monarchy Men.

Newcastle was one of the first towns on the canal network. The canal, running from the Trent and Mersey Canal at Stoke-on-Trent to Sir Nigel Gresley's Canal has been disused since 1935 and most of it filled in. 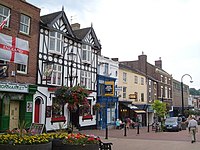 When Stoke-on-Trent was formed by the 1910 amalgamation of the "six towns" (Stoke-upon-Trent, Hanley, Fenton, Longton, Burslem and Tunstall) Newcastle remained separate. Despite its close proximity, it was not directly involved in the pottery industry, and it strongly opposed attempts to add it in 1930[5] with a postcard poll showing residents opposing it by a majority of 97.4%. Although passed by the House of Commons, it was rejected by the House of Lords.[1]

The pottery industry was strong in Newcastle until the latter part of the twentieth century. When the factories closed the town sank into decline and unemployment.

Like neighbouring Stoke-on-Trent, Newcastle's early economy was based around hatting trade, silk and cotton mills. Later coal mining, brick manufacture, iron casting and engineering rose to prominence.[2] Very fine red earthenware and also soft-paste porcelain tableware (the first such production in Staffordshire) was produced in Newcastle at Samuel Bell's factory in Lower Street between 1724 and 1754 when all production ceased. With the exception of a failed enterprise between 1790 and 1797, which then switched to brewing, there was no further commercial production of pottery within the town of Newcastle. production of earthenware tiles however continued at several locations within the borough. Manufacture of fine bone china was re-established in the borough in 1963 by Mayfair Pottery at Chesterton.

The manufacture in the borough of clay tobacco smoking pipes started about 1637 and grew rapidly and was second only to hatting within the borough. Nationally, the town was ranked with Chester, York and Kingston upon Hull as the four major pipe producers. This industry continued until the mid-19th century when decline set in rapidly and by 1881 only one tobacco pipe maker was left.

In the 17th, 18th and 19th centuries the town had a flourishing felt hat manufacturing industry,[2] which was probably at its peak locally in the 1820s when a third of the town's population were involved in the industry in over 20 factories but by 1892 there was only one manufacturer still in production in the town.

In 1944, the Rolls-Royce Derwent engine for the Gloster Meteor fighter was made in the borough.

Near the turn of 21st century, the town received a major redevelopment to incorporate a new street (Castle Walk) in to the town centre, providing Newcastle with a new bus station and bringing in more companies.

A large number of pubs, clubs and bars provides Newcastle with a relatively strong nightlife, with students' night being on Wednesdays; this aspect of Newcastle has arguably eclipsed the shopping and market town it once was.

Sites of the town 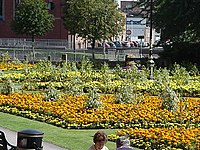 Newcastle excels in the Royal Horticultural Society Britain in Bloom competition. In 2005 it was the national winner in the 'small city/large town' category (35K-100K).[6] The town features several parks including the Queen's Gardens, at the eastern end of Ironmarket, was awarded the Britain in Bloom Judges' Award for Horticultural Excellence in 2003[7] and is the only park within the ring road. Grosvenor Gardens in the centre of one of the town's roundabouts, hidden away below road level. The Queen Elizabeth Garden is located outside the town centre and is to undergo refurbishment using National Lottery Heritage Fund money.[8]

To the north west of the town centre is Brampton Park, home to the museum and art gallery.[9]

Dating back to 1173 Newcastle's market, known as The Stones, operates on the High Street.[10] The market was originally held on Sunday; in the reign of King John it was changed to Saturday; by the charter of Queen Elizabeth it was fixed on Monday. Grants of fairs were given by Edward I, Edward III and Henry VI. Today the market is open six days a week, and there are over 80 stalls. Mondays, Wednesdays, Fridays and Saturdays see a general market, on Tuesdays there is an antiques market and Thursdays are for the sale of bric-a-brac.

A cattle and livestock market was held on Mondays until the early 1990s; the site of the cattle market is now a branch of Morrison's supermarket.

The town has a long religious history. It was the birthplace of John James Blunt, a divine and Anglican priest.

The town itself has a large number of Anglican churches including St. Giles' Church, the mediæval parish church dating from 1290.

In the 18th century John Wesley made repeated visits to the area,[11] which was becoming more industrialised. He recruited many residents to Methodism. This is reflected in the large number of Methodist churches. The largest Baptist church in North Staffordshire is in Newcastle.