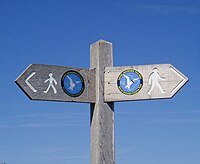 The 125-mile path mainly follows the coast. Exceptions are where the path comes inland from Moel y Don by Plas Newydd estate, and the Bodorgan Estate on the west of the island between Aberffraw and Malltraeth, where the Duke and Duchess of Cambridge used to live.[1] The loop officially begins and ends at Holyhead, and is described in the official guidebook in an anti-clockwise direction. It cost £1.4 million and runs virtually within the length of the entire Area of Outstanding Natural Beauty, using the existing network of public rights of way and some designated permissive paths. For example, the coastal path at Mynachdy is closed between mid-September and mid-February. There are alternatives to these permissive paths. The path is well signposted throughout. It has been walked in as little as four days, but around 7–10 days is a guideline for most walkers aiming to complete the whole path.

European[Objective 1 funds have contributed to this project, which aims to meet the perceived growing demand for coastal walking. The path has been created by a partnership led by community agency Menter Môn and the Isle of Anglesey Council. It was formally opened by Rhodri Morgan AM, the former First Minister of Wales, on 9 June 2006.

The Anglesey Coastal Path forms part of the Wales Coast Path, an 870-mile long-distance walking route around the whole coast of Wales from Chepstow to Queensferry, officially opened in May 2012.[2]

There are a number of smaller trails very near the Coast Path, which often take users inland on shorter routes: these include:

Other places on the path

Starting at Holyhead and walking anti-clockwise, the path passes through or near: