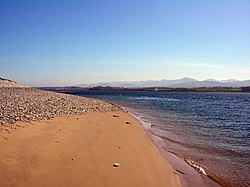 Looking across Abermenai Point across the Menai Strait towards Caernarfonshire

Abermenai Point is a headland in the south-east of the island of Anglesey. It is the southernmost point of the county and is the northern point of the western entrance of the Menai Strait.

The headland is mainly composed of sand dunes at the end of Newborough Warren and therefore has no road leading up to or onto it. The nearest major public road, along which a public bus runs is the A4080 at Newborough.[1] Due to its exposed location and the nature of the straits the Ordnance Survey map for the point carries a warning "Public Rights of Way to Abermenai Point can be dangerous under tidal conditions."

The earliest recorded ferry crossing route from the island to the mainland ran from the point to the site at which Fort Belan now sits.[2] Records in the late 11th century relating to the then King of Gwynedd, Gruffudd ap Cynan state that a ferryman was employed there and ferry houses at both locations have been recorded throughout history. In 1725, Daniel Defoe, the author of novels such as "Robinson Crusoe" used the crossing on his way to Holyhead.[3] The ferry ceased to run in the mid-19th century and by the 1940s almost all trace of it had disappeared.[4] The decline of the ferry service was almost certainly due to the construction between 1846 and 1850 of the Britannia Bridge further east up the Strait which brought the railway to the island.

This Anglesey article is a stub: help to improve Wikishire by building it up.
Retrieved from "https://wikishire.co.uk/w/index.php?title=Abermenai_Point&oldid=47144"
Categories: