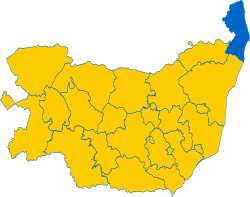 Mutford and Lothingland is a hundred in Suffolk, situated in the very north-east of the county, adjacent to the border with Norfolk. It is bounded by Wangford to the south-west; by Blything to the south; and by Norfolk to the north and west. Containing those parts of Great Yarmouth in Suffolk, it had a population of 128,624 in 2011.

Mutford is that part of the hundred south of the Oulton Broad, with Lothingland to the north. Both are shown as separate hundreds on the 1832 Boundary Commission map, although they were combined in every previous census.

*: Extends into Norfolk.
†: Mostly in Norfolk.