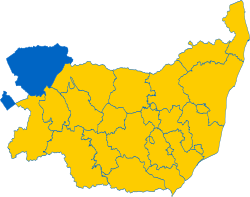 Lackford is a hundred in Suffolk, situated in the north-west of the county, adjacent to the borders with Cambridgeshire and Norfolk. It is bounded by Blackbourn to the south-east; by Thingoe and Risbridge to the south; by Cambridgeshire to the west; and by Norfolk to the north. It had a population of 60,911 in 2011.

The hundred is apparently named after the ford below Lackford Bridge, where the Icknield Way crosses the River Lark. The adjacent vill of Lackford, in Thingoe hundred, is also named after the same ford.