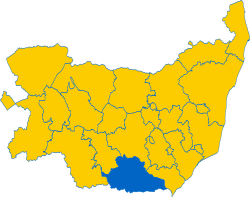 Samford is a hundred in Suffolk, situated in the south of the county, adjacent to the border with Essex. It is bounded by Babergh to the west; by Cosford to the north-west; by Bosmere and Claydon to the north; by Colneis to the east; and by Essex to the south. Including those parts of Ipswich west of the River Orwell, it had a population of 57,605 in 2011.

Additionally, those parts of Ipswich west of the River Orwell are locally situate in Samford hundred.