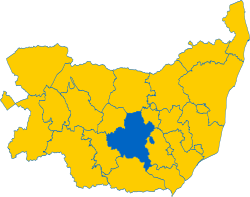 Additionally, those parts of Ipswich east of the River Orwell are locally situate in Bosmere and Claydon hundred.