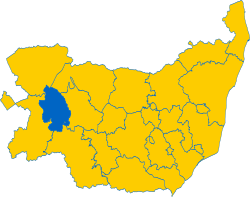 Thingoe is a hundred in Suffolk, situated in the west of the county. It is bounded by Risbridge to the south-west; by Lackford to the north-west; by Blackbourn to the north-east; by Thedwestry to the east; and by Babergh to the south. Including those parts of Bury St Edmunds west of the River Lark, it had a population of 39,813 in 2011.

The name derives from the words thing, a Norse word meaning "assembly", and howe, again Norse, meaning detached hill or mound.[1] The probable original meeting place for the hundred was at Thingoe Hill in Bury St Edmunds.

Additionally, those parts of Bury St Edmunds west of the River Lark are locally situate in Thingoe hundred.