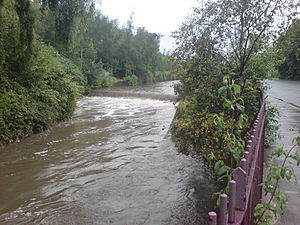 The River Irk, swollen by rain, in Newtown

The River Irk is a river of Lancashire that flows through the industrial and post-industrial towns in the south of that county.

The Irk rises to the east of Royton and runs west past Chadderton and Middleton, and later flows through the northern suburbs of Manchester before disgourging its waters into the River Irwell in the city centre.

The Irk served heavy industry in the industrialising age and became horribly polluted, and its course was extensively altered. Recently a project has been set up to rejuvenate the river and remove the pollution.

Historically, the Irk has also been known as Iwrck or the Irke, names thought to have been derived from the Roebuck, suggesting that the Irk was at one time a swift-running river.[1]

In the Middle Ages there was a mill by the Irk at which the tenants of the manor had grind their corn and its fisheries were controlled by the lord of the manor. In the 16th century throwing carrion and other offensive matter into the Irk was forbidden. Water for Manchester was drawn from the river before the Industrial Revolution.[2]

A bridge over the Irk was recorded in 1381. The river was noted for destructive floods. In 1480 the burgesses of Manchester described the highway between Manchester and Collyhurst which "the water of Irk had worn out". In 1816, of seven bridges over the Irk, six were liable to be flooded after heavy rain but the seventh, the Ducie Bridge completed in 1814 was above flood levels.[3]

According to The New Gazetteer of Lancashire (1830) the Irk had more mill seats upon it than any other stream of its length in the Kingdom." and that "the eels in this river were formerly remarkable for their fatness, which was attributed to the grease and oils expressed by the mills from the woollen cloths and mixed with the waters."[4] However, by the start of the 20th century the Irk Valley between Crumpsall and Blackley had been left a neglected river, "not only the blackest but the most sluggish of all rivers".

The Marxist writer Friedrich Engels vividly described the banks of the Irk in Manchester at the height of the city's industrial excess:

"The south bank of the Irk is here very steep and between fifteen and thirty feet high. On this declivitous hillside there are planted three rows of houses, of which the lowest rise directly out of the river, while the front walls of the highest stand on the crest of the hill in Long Millgate. Among them are mills on the river, in short, the method of construction is as crowded and disorderly here as in the lower part of Long Millgate. Right and left a multitude of covered passages lead from the main street into numerous courts, and he who turns in thither gets into a filth and disgusting grime, the equal of which is not to be found - especially in the courts which lead down to the Irk, and which contain unqualifiedly the most horrible dwellings which I have yet beheld. In one of these courts there stands directly at the entrance, at the end of the covered passage, a privy without a door, so dirty that the inhabitants can pass into and out of the court only by passing through foul pools of stagnant urine and excrement. This is the first court on the Irk above Ducie Bridge - in case any one should care to look into it. Below it on the river there are several tanneries which fill the whole neighbourhood with the stench of animal putrefaction. Below Ducie Bridge the only entrance to most of the houses is by means of narrow, dirty stairs and over heaps of refuse and filth. The first court below Ducie Bridge, known as Allen's Court, was in such a state at the time of the cholera that the sanitary police ordered it evacuated, swept and disinfected with chloride of lime. Dr. Kay gives a terrible description of the state of this court at that time. Since then, it seems to have been partially torn away and rebuilt; at least looking down from Ducie Bridge, the passer-by sees several ruined walls and heaps of debris with some newer houses. The view from this bridge, mercifully concealed from mortals of small stature by a parapet as high as a man, is characteristic for the whole district. At the bottom flows, or rather stagnates, the Irk, a narrow, coal-black, foul-smelling stream, full of debris and refuse, which it deposits on the shallower right bank."

The Irk meets the River Irwell

The river has long since been culverted as it reaches the city centre. It disappears beneath Manchester Victoria railway station into a brick tunnel at Ducie Bridge and empties into the Irwell beneath a railway viaduct.

On August 15, 1953 the front coach of a Manchester to Bury electric train fell from the viaduct over the River Irk after colliding with a local steam train. Ten people were killed and 58 injured in what became known as the Irk Valley Junction disaster.[5]