The Middle Temple, is one of the four Inns of Court; the professional associations to which all barristers in England and Wales must belong and in which they are called to the Bar. It is governed by The Honourable Society of the Middle Temple, comprising the barristers of the inn.

The Temple takes its name from the Knights Templar, who held the estate until their abolition in 1312, and in that time lawyers gathered here.

Almost a world of its own apart from the bustle of the city, the Middle Temple is a large, enclosed precinct containing a complex of buildings and gardens, laid out at the western boundary of the City of London, between Fleet Street and the embankment of the River Thames. It is one of a pair with the Inner Temple which adjoins its eastern side. Both the Middle Temple and the Inner Temple are 'liberties' outside the jurisdiction of the City of London and recognised as local authorities in their own right: this is a status claimed by the Society as inherited from the extraordinary privileges accorded to the Knights Templar in their time. 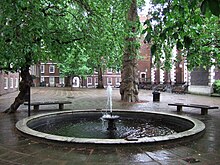 Fountain Court, at the heart of Middle Temple

The area of the Inns of Court is the heart of legal London, with the Temples to the south of Fleet Street and Gray's Inn and Lincoln's Inn a little way to the north. The Royal Courts of Justice were built on the north side of Fleet Street opposite the portal of the Middle Temple for this reason, with the Law Society Hall a step away on Chancery Lane and innumerable court offices, barristers' chambers and solicitors' offices within the four inns or close by.

In the 13th century, the Inns of Court originated as hostels and schools for student lawyers. The Middle Temple is the western part of "The Temple", the headquarters of the Knights Templar until they were dissolved in 1312. The Temple Church still stands as a "peculiar" outside the authority of the Bishop of London, and serves as the church of the Inner and Middle Temples. 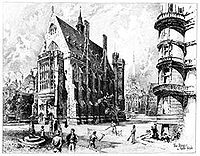 Interior of the hall and its double-hammerbeam roof

Middle Temple Hall is at the heart of the Inn, and the Inn's student members are required to attend a minimum of 12 qualifying sessions there. Qualifying sessions, formerly known as "dinners", combine collegiate and educational elements and will usually combine a dinner or reception with lectures, debates, mooting, or musical performances.

Middle Temple Hall is also a popular venue for banqueting, weddings, receptions and parties. In recent years, it has become a much-used film location—the cobbled streets, historic buildings and gas lighting give it a unique atmosphere. William Shakespeare's Twelfth Night received its first recorded performance here, at the feast Candlemas in 1602.[1]

The Middle Temple (and the neighbouring Inner Temple) is also one of the few remaining liberties: it is an independent extra-parochial area considered to lie within the City of London but not governed by the Corporation of London,[2] and today it is regarded as a local authority for most purposes. The Inn is equally outside the ecclesiastical jurisdiction of the Bishop of London.

Some of the Inn's buildings (those along Essex Street, Devereux Court and the Queen Elizabeth Building near the Embankment) lie just outside the liberty of the Middle Temple and the City's boundary. Quadrant House (7–15 Fleet Street) was acquired by the Middle Temple in 1999 and after five years of conversion is now a barristers' chambers. This lies outside the liberty (though immediately adjacent to it) but is within the City of London.