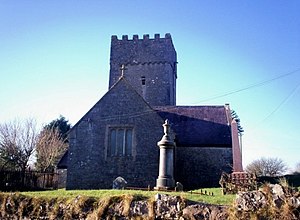 Marros is an ancient parish in the extreme south-west of Carmarthenshire, adjacent to the border with Pembrokeshire and Carmarthen Bay. It is bordered by Pendine to the east; by Eglwyscummin to the north-east; by Cyffic to the north; and by Amroth and Crunwear in Pembrokeshire to the west.

The greater part of the coastline is formed by of a fine sandy beach, a few miles in length. Marros also boasts a riding centre and campsite.

The parish church is dedicated to St Lawrence and is Grade-II listed. It was originally a chapel of ease during the mediæval period, belonging to St Martin's Church, Laugharne, before becoming a parish church in 1769. According to local tradition, the church was originally intended to be located in the field where the Giants' Graves mound is located, a mile to the south-west. However, the stones placed there were mysteriously removed to the current church site.[1]

Marros was constituted a civil parish in 1894 which merged with those of Eglwyscummin and Cyffic in 1935.

This Carmarthenshire article is a stub: help to improve Wikishire by building it up.