Laugharne is a town in Carmarthenshire, lying on the estuary of the River Tâf. It is known for having been the home of Dylan Thomas from 1949 until his death in 1953, and is thought to have been an inspiration for the fictional town of Llareggub in Under Milk Wood.

The name of the town is not a native name but is Irish, taken from the name of Owen Laugharne of St Brides, a twelfth century lord of the castle.

The cockle industry was once a significant part of the Laugharne economy, and the well-established pickling firm, Parsons, have their origins in Laugharne. Until cockles became important, fishing in Carmarthen Bay was of great importance.

Attractions in the town include the 12th-century Laugharne Castle, the town hall and the birdlife of the estuary. 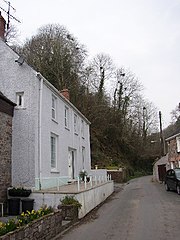 The Laugharne accent is unique to the area, suggested as sounding like a mix of English West-country with Carmarthenshire Welsh. Many local words and phrases are archaic, for example "How art thee maid?". Laugharne is at the eastern end of the south Wales Englishry and only a minority of its inhabitants have ever spoken Welsh. The language boundary lies a few miles north of Laugharne.

Laugharne Corporation is an almost unique institution, and the last surviving mediæval corporation in the United Kingdom outside the City of London. The Corporation was established in 1291 by Sir Guy de Brian, a Marcher Lord. The Corporation is presided over by the Portreeve, wearing his traditional chain of gold cockle shells, (one added by each portreeve, with his name and date of tenure on the reverse), the Aldermen, and the body of Burgesses. The title of portreeve is conferred annually, with the Portreeve being sworn in on the first Monday after Michaelmas at the Big Court.

The Corporation holds a court-leet half-yearly formerly dealing with criminal cases, and a court-baron every fortnight, dealing with civil suits within the lordship, especially in matters related to land, where administration of the common fields is dealt with.

The Laugharne open field system is one of only two surviving and still in use today in Britain. The most senior 76 burgesses get a strang of land on Hugden for life, to be used in a form of mediæval strip farming.

Customs associated with the Corporation include the Common walk (also known as beating the bounds), which occurs on Whit Monday every three years. This event is attended by most of the young and firm local population, their number swelled by many visitors. The local pubs open at approx 5 o'clock in the morning, and following a liquid breakfast the throng commence a trek of some 25 miles around the boundaries of the Corporation lands. At significant historical landmarks a victim is selected to name the place. If they cannot answer, they are hoisted upside down and ceremonially beaten three times on the rear.

In the early 12th century, grants of lands were made to Flemings by King Henry I when their country was flooded, and later they were joined by Flemish soldiers banished by Henry II.[2] They were weavers and dyers and were such an influence that the Welsh language was hardly ever heard in Laugharne.

A castle, known originally as the Castle of Abercorran, existed in Laugharne before the Norman Conquest and belonged to the princes of South Wales. Henry II visited it in 1172 on his return from Ireland and made peace with Prince Rhys of Dynevor. Through the marriage of Prince Rhys' daughter, the castle passed to Sir Guy de Brian, who had been Lord High Admiral of England. His daughter Elizabeth inherited the castle and married Owen Laugharne of St Bride's who gave his name to the castle.

Possession passed to the Crown and during the 16th century belonged to Sir John Perrot, returning to the crown after his death. In 1644 the castle was garrisoned for the king and taken for Parliament by General William Laugharne, who subsequently reverted to the king's side; Oliver Cromwell lay siege to the castle, burning and leaving it in ruins.

Laugharne is mentioned in records as being affected by the Bristol Channel floods of 1607 but it is not known whether this had any long-term effects on the town.

During the Great War, over 300 men and women of Laugharne and her surrounding villages volunteered to fight in His Majesty's Forces, 54 of these lost their lives. They are buried or commemorated all over the world, from Belgium to India. In the Second World War the area lost another 20 sons. These men, alongside their compatriots from Carmarthenshire are remembered in perpetuity on the website Carmarthenshire War Memorials.[3]

In 2007, Laugharne hosted a three-day literary festival - The Laugharne Weekend - intended as an annual event, and featuring writers such as Niall Griffiths and Patrick McCabe.

The 2008 event was headlined by Will Self, Howard Marks and Patti Smith. Although the town's Millennium Hall was used as the main venue, smaller events were hosted by local venues including Dylan Thomas' Boathouse.[4]