Marple is a small town in Cheshire, latterly attached to the conurbation of towns surrounding Stockport. It stands on the banks of the River Goyt southeast of Stockport.

Known as Merpille by the early 13th century, probably from the words mære and pyll meaning "a pool or stream near the boundary".[1] 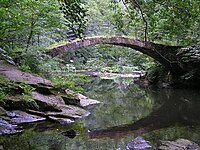 Footbridge over the River Goyt

Marple lies along the border with Derbyshire, here marked by the River Goyt to the east of the town. Across the bridge in Derbyshire is Marple Bridge. Nearby too are Hawk Green (a southern suburb of Marple) and High Lane beyond it, and over the river are Mellor and New Mills.

The area round about Marple ranges from townscape, to heavily wooded valleys to hill-top moorland. On a clear day from Cobden Edge it is possible to view the Beetham Tower in Manchester as well as the city centre, the Winter Hill TV transmitter and the surrounding counties of Cheshire, Derbyshire, Lancashire and Yorkshire and the mountains of North Wales.

At the opening of the Norman era, the area was predominantly within the Macclesfield Forest, and was omitted from the Domesday survey. The first mention of the area was in 1122, in a deed for the sale of land. In 1220 the land passed to the Vernon family where it remained for several generations.

The pre-Industrial Revolution inhabitants of the village mostly worked on small farms and others specialised in linen weaving and hatting. After 1790, Samuel Oldknow transformed much of this lifestyle, with the construction of lime kilns and mills.[2] The Industrial Revolution had arrived, and the population of the village began to rise with the construction of terraces to house mill workers and the formation of a village centre filled with private businesses. 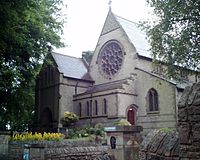 Marple is notable for its series of canal locks close to the village centre. The Peak Forest Canal skirts the village, running alongside Marple Memorial Park and Brabyns Park until it reaches the Marple Aqueduct and beyond. The canal served as a vital link during the Industrial Revolution. Nowadays it provides an area of relaxation for walkers, anglers and boaters.

The Roman Lakes leisure complex is popular with walkers, anglers, nature lovers and horse riders. It is located in the valley bottom close to Strines. The area was named in the Victorian era as an attraction to tourists not because it had links with the Romans (also true of Roman Bridge, a packhorse bridge over the Goyt). In the area closest to the river there was a mill built by Samuel Oldknow; it is now ruined and overgrown. In 2011, volunteers uncovered the wheelpit and entrance footings to the mill and are currently seeking funds to continue the exploration. The wheelpit, which when built was the largest in the world, is now viewable.

The Middlewood Way is a 10-mile walking/cycling path between Marple and Macclesfield, following the line of the former Macclesfield, Bollington and Marple Railway.[3] 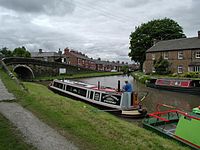 Junction of the Peak Forest and Macclesfield Canals

Marple has appeared in:

Marple Hall is located close to where Marple Hall School now stands. The remains of the hall can be explored, though very little remains.

The hall was the ancestral home of the Bradshaws and passed to the Isherwoods. It was demolished in 1959 after it was offered to the council in 1954 by the writer Christopher Isherwood, who had inherited it. By this time the hall had been ransacked by vandals and looters. Much of the estate is now residential housing or the school. The old hall foundations can be seen on the corner of Marple Hall Drive. There is a plaque on a piece of stone which is the only remaining lintel from the house. The shutters from its windows are restored and on display in Marple Library. The hall overlooked the River Goyt and it is still possible to walk from there to the river following a pathway which once led to the Dooley Lane entrance to the estate. There are cobbles from Marple Hall Drive to the hall. 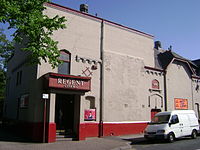 Since 1932 Marple has had a cinema in a building designed in 1878 as a place of worship/refuge. The building was purchased in 1932 by the "Marple Cinema Company" and became the Regent Cinema.[4] It remains open,[5] as one of the few independent cinemas in the UK. The Carver Theatre,[6] was built as a boys' club and gymnasium.[7] It hosts the 1st Marple Scout and Guide Gang Show in March.

The village has two brass bands, the Marple Band and the Hawk Green (Marple) Band.

Marple Scouts is large Scout group which contains several Beaver colonies, Cub packs and Scout troops with Explorer and Network units attached. The group was formed in 1908 and now has over 250 members. It has a hut, located by Memorial Park in the centre of Marple. Members have participated in numerous international camps over the years. There is a large Guide presence which meets at a purpose built hut near All Saints' School.