From Wikishire
(Redirected from Marlow, Buckinghamshire)
Jump to: navigation, search

Marlow (historically Great Marlow or Chipping Marlow) is a pretty and prosperous town on the north bank of the River Thames, in southern Buckinghamshire. The river forms the shape and focus for the town and it has attracted a goodly number of rowers to live there, including several Olympic medallists.

The river is always full of boats, and is lined with expensive houses on both banks, many with private boathouses.

Marlow is 4 miles south-southwest of High Wycombe and 5 miles west-northwest of Maidenhead. Henley-on-Thames is 11 miles upstream in Oxfordshire. Beside Great Marlow, a mile to the north, is Marlow Bottom. Little Marlow is nearby to the east and Bourne End is further along the same road. To the south across the Thames in Berkshire are Bisham and Cookham Dean.

The name of the town is recorded in 1015 as Mere Lafan, meaning "lake's leavings"; the land left after the draining of a lake.[1] Marlow is recorded in the Domesday Book as Merlaue.[2]

From Norman times the manor, parish and later borough was formally known as Great Marlow, distinguishing it from Little Marlow. The ancient parish was large, including rural areas north and west of the town. Latterly though the town has just been known as Marlow. 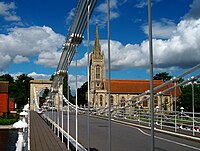 The current bridge at Marlow is a suspension bridge, designed by William Tierney Clark in 1832, and was a prototype for the nearly identical but larger Széchenyi Chain Bridge across the River Danube in Budapest, a fact commemorated by a plaque on the Marlow bridge.

The Junior Wing of the Royal Military College, now based at Sandhurst on the border between Berkshire and Surrey, was once based at Remnantz in West Street, a mansion built in the early 18th century and which served as the junior section of the college from 1801 until 1812.[3] The weather vane on the building features a man firing a cannon, which possibly dates from that period. The building is now owned by the Bosley family.

The Hand & Flowers, the first gastropub to hold two Michelin stars is located on West Street.[4]

Marlow Lock on the Thames was originally built in the 14th century.

Dr William Battie, an eminent eighteenth century physician specialising in mental illness, built and lived in Court Garden House from 1758 until his death in 1776. Local folk-lore has it that he forgot to include a staircase to the first floor, so it had to be added later.[5]

In 1789, Battie's daughter sold the house to Richard Davenport, High Sheriff of Buckinghamshire, who lived there for 10 years, during which, Court Garden was described in Boydells ‘History of the River Thames’, published in 1793, as "a fine Georgian house standing on a gentle eminence, a lawn of some extent descending gradually from it to the river".

In 1926 the estate was saved for the people of Marlow, largely due to the efforts of local resident and Crimean War veteran General George Higginson, after whom Higginson Park is named.[6]

Marlow has always owed its importance to its location on the River Thames, where the road from Reading to High Wycombe crosses the river. Great Marlow had its own market by 1227 (hence the name "Chipping Marlow"), although the market lapsed before 1600. From 1301 to 1307 the town had its own Member of Parliament, and it returned two members from 1624 to 1867.[7]

The manor of Marlow had belonged to the Earls of Mercia and fell to the Crown after the Conquest. William the Conqueror gave it to his Queen, Matilda. King Henry I bestowed it on his bastard son, Robert de Melhent, afterwards Earl of Gloucester, from whom it passed through the great families of the Middle Ages; the Clares, then the Despencers, the Beauchamps and Nevilles, Earls of Warwick, notwithstanding the Wars of the Roses, until Richard III's marriage to Anne Neville brought it back to the Crown. Queen Mary I ("Bloody Mary") granted the manor to William Lord Paget, and after a century of Pagets it was sold repeatedly until Sir William Clayton bought it in 1736, and in whose family the manor remains.[8] 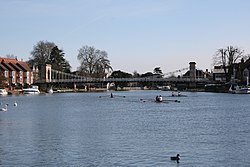 Rowers on the Thames

Marlow Rowing Club, founded in 1871, is one of Britain's premier rowing clubs and has produced many Olympic oarsmen including Sir Steve Redgrave. The club is based by Marlow Bridge and exercises above and below the lock. Olympic lightweight men's double sculls gold-medallist at Beijing 2008 Zac Purchase is a former member of Marlow Rowing Club.

The town also hosts a rowing regatta every year. 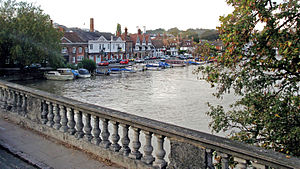 Marlow and the river

There are two regattas associated with Marlow; the Marlow Town Regatta and Marlow International Regatta. Earliest records indicate a regatta took place annually on the River Thames in Marlow from 1855 the latter transferred to the purpose built Dorney Lake, owned by Eton College, in 2003. Marlow still hosts its Original River Regatta which takes place annually in June.

Marlow FM[9] is a volunteer-run community radio station that launched on FM on 11 May 2011 that serves Marlow and the surrounding areas on 97.5FM, and also streams over the internet. 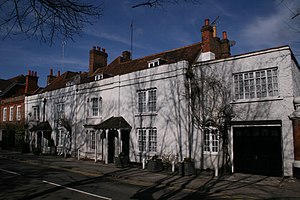 MARLOW is one of the pleasantest river centres I know of. It is a bustling, lively little town; not very picturesque on the whole, it is true, but there are many quaint nooks and corners to be found in it
— Jerome K Jerome - Three Men In A Boat