Bourne End is a village in southern Buckinghamshire, near Little Marlow, standing on the River Wye close to where it falls into the River Thames. Bourne End has just under five and a half thousand inhabitants.

Bourne End once had a Methodist church in Furlong Road, which closed down in 2002. Well End also once had a Congregational mission hall, in the late nineteenth and early twentieth centuries, which is now a residential house, named The Chapel.

Bourne End sustains many businesses and services whilst still retaining a village-like atmosphere. There is a Community Centre in the centre of the village, with a large hall, function rooms and a bar, which is open for member's use. It is, for many, considered the focal point of village activity.

Bourne End's original location is somewhat different from today's established village centre, a half a mile downstream on the River Thames, hence the village's name. The hamlet, as it was, appears on Morden's 1722 map of Buckinghamshire as "Born end".[1] It was noted in the nineteenth century however, that the name had been corrupted to "Bone End", apparently through local mispronunciation, and thence on official maps and documents. In 1858, the vicar of Wooburn successfully reversed this, and the corrected name remains in use today.[2]

The entire length of the River Wye was the provider of water power for many mills in the valley for hundreds of years, and Bourne End was no exception. There were four on the final stretch of the river; Princes Mill, Jacksons (or Gunpowder) Mill, Hedsor Mill and Lower Mill. These mills were historically the predominant employers of the area, along with the local farms and two wharfs on the Thames.

In the early nineteenth century, the settlement known as Bourne End was a hamlet of Wooburn parish, along with others such as Spring Gardens, Eghams Green, Cores End, Heavens Lea and Upper Bourne End. This changed with the emergence of the Wycombe Railway Company]] in 1846. By 1854, Isambard Kingdom Brunel had designed and built a railway linking Maidenhead to High Wycombe, which station was originally known as Marlow Road station, until 1874, a year after the branch line to Marlow was built, and from then on Bourne End station.[3] The railway created more travel opportunities for locals and greatly benefited the mills, and thus Bourne End expanded, on a greater scale than other similar settlements in the surrounding area.

The hamlets soon merged into what is now known as Bourne End, as did Well End and Coldmoorholme in the neighbouring parish of Little Marlow. Both a church and school were built at the turn of the century for the residents' convenience. The Parade became established as the focal point of the village for shops and services.

The Royalty Cinema opened in The Parade in 1934. The late 1940s saw extensive development in Bourne End, of the Chalklands estate and the Council Estate north of The Parade. The 1960s saw the building of Community Centre and Library in Wakeman Road after some years of local campaigning.

The Beeching Axe hit the village in 1969, when it was announced the line between Bourne End and High Wycombe would be shut. The track bed was lifted soon after closure in 1970. Some land was developed on as an office park, but much remains as a de facto footpath between the village and Wooburn.

The Thames at Bourne End

Bourne End lies between the M4 and M40 motorways, and retains its railway station on the Maidenhead to Marlow branch line. Because of its close proximity to London, it has become a popular place for commuters have homes. Close by is the River Thames, with some publicly accessible frontage; the River Wye skirts across on the eastern side of the village, joining the Thames to the south.

All of the mills along the Wye Valley have now been shut down and demolished, Jacksons Mill in Furlong Road being the last (in Bourne End) in the late 1980s. These have been replaced by houses, offices or industrial estates, which has led to the continuation of the village as an employment centre.

Bourne End remains a distinct settlement, although the continued house-building over the past century means it is threatened by the evident ribbon development, through to High Wycombe. In 1997, when the Local Plan was in preparation, the Residents Associations of Bourne End and Wooburn successfully lobbied to stop Slate Meadow (the field which separates the two settlements) being designated for housing for the time being. Other undeveloped land around the village looks likely to remain so, as it has been specified as Green Belt, an Area of Outstanding Natural Beauty, a Site of Special Scientific Interest, or a combination of the three. In parts, Bourne End is surrounded by farmland. Somewhat further away, Cliveden and Hedsor overlook the village from higher ground to the south east. 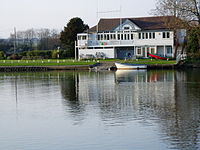 The village has two recreation grounds (Furlong Road and Blind Lane), riverside open space at the marina and Spade Oak Reach, a Junior Sports Club and fitness centre and the long-established Upper Thames Sailing Club. For many residents and visitors alike, the river is the central attraction of Bourne End, and many leisure pursuits involve or revolve around it. The Sailing Club traditionally host a week-long regatta every year in June, known as Bourne End Week.

Near Bourne End, across the River Thames, is Cock Marsh, an area of common land and floodplain owned by the National Trust. It is a Site of Special Scientific Interest and has a prehistoric burial mound. Cock Marsh is accessible by way of the footbridge (attached to the railway bridge) over the river, and footpaths continue to Cookham, Cookham Dean and beyond.

The Thames Path National Trail follows the River Thames through Bourne End; upstream on the Buckinghamshire side, crossing the river at the footbridge, and downstream through Berkshire. 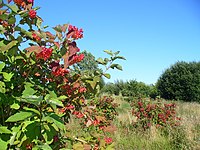