Maltby is a former mining town in the West Riding of Yorkshire, a place of 16,856 souls (in 2011). It is found in the main industrial belt of the West Riding about 6 miles east of Rotherham town centre and 10 miles northeast of Sheffield city centre. It forms a continuous urban area with Hellaby, separated from the rest of Rotherham by the M18 motorway.

Maltby is mentioned in the Domesday Book as "by-malt", and was for centuries a very small village with the benefits of a fairly large stream nearby and very rich land for farming available. Roche Abbey, on the outskirts of Maltby, was founded in the 12th century, and was ruined during the Dissolution of the Monasteries in the reign of King Henry VIII.

Coal was discovered in the area in the late 19th century. In order to house the colliery's workers, the colliery company built a large estate known as the 'Model Village' to the east of the town centre. The last colliery in the district was Maltby Main Colliery, established 1910 and faced with closure in March 2013.

From 1900 until 1929, the town was served by Maltby railway station, with services running between Doncaster and Worksop. The station's platforms still remain and the line is an important freight route. John Brown's Private Railway also ran by the west of Maltby, but the track has been lifted and is now a public footpath; a short stretch of track and a platform remains. 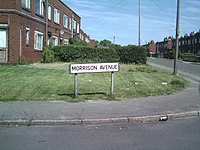 During the Second World War, a munitions factory, ROF Maltby, was established on the outskirts of Maltby close to the colliery; to house these workers, an estate known locally as 'Little London' was built to house its workers, who had moved from Enfield in Middlesex.[1]

Maltby also had a knitwear factory, Byfords, which supplied companies including Pringle - this has long since closed, and a police station was built on the site.

Maltby's main council housing stock went into serious disrepair during the 1980s with areas like "White City" and the "Tarran estate" (now demolished) worst affected. Since Maltby began to benefit from local government funding in 1997, council estates such as White City and Birk's Holt Drive have been rejuvenated and refurbished. New council housing was opened in 2011 on the site of the former Tarran estate.[2] 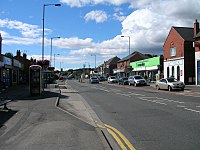 Before coal was discovered in the area, Maltby was a small agricultural village with a population of around 500 at the start of the 1900s. Maltby has a large Roman Catholic congregation, predominantly first or second generation Irish immigrants, many of whom were navvies who constructed Maltby Colliery in the early 20th century. There is a working men's club for Roman Catholics, Maltby Catholic Club, on Millindale.

The town is served by a variety of shops and businesses. There is a large town centre supermarket on the site of what was once an indoor and outdoor market.

There are several public houses in the town, the oldest of which is the White Swan dating from the 16th century, though this closed in 2013.

The ancient game of "beck ball" was revived in the mid-1980s to some success; this is a sort of rugby game, where opposing teams generally fight a turf war in the local stream, Maltby Dike. This stream runs throughout the bottom end of Maltby along the A631 until it diverges along Maltby Crags and the A634 through Roche Abbey, then emptying into the River Torne a few miles upstream at Sandbeck Hall, the home of the Earl of Scarborough.

Despite the rebuilding/refurbishment of some housing stock at the beginning of the 21st century, the ward of Maltby, particularly the eastern area, (in 2010) included areas of high deprivation. 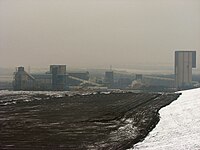 Sinking of the original shafts of Maltby Colliery began in 1907, as part of the development a large estate known as the "Model Village" was constructed as housing for the colliery workers.

An explosion in the colliery occurred in 1923, resulting in 27 deaths, and the pit was the site of mass picketing during the 1984-85 miners' strike. At nationalisation, the pit was sold to RJB Mining (later known as UK Coal) in 1994, and later to Hargreaves Services in 2007.

After encountering geological problems when trying to access a new coal seam, colliery owner Hargreaves announced that on health and safety grounds the mine would have to close. Maltby Colliery closed in March 2013, with a march held by former miners and residents of the town to mark the occasion.[3]

The Miners' Welfare Institute (locally known as the "stute"), a working mens club for miners, is still open to this day.

Maltby was the setting for the book Welcome to Everytown, by writer and philosopher Julian Baggini, who lived in the area for six months. This stay was to uncover the British mind as the area is demographically a representation of the nation.