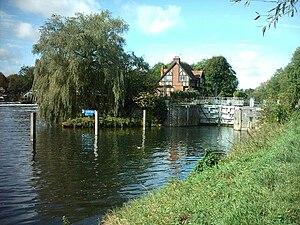 Bray Lock is a lock and weir on the River Thames near Bray and Dorney Reach, and is just above the M4 Bridge across the Thames. The lock is on the Buckinghamshire side of the river on the opposite bank from Bray itself and Maidenhead which are in Berkshire. Here, the county border follows the main course of the Thames. The pound lock was built by the Thames Navigation Commission relatively late in 1845 The lock keeper's cottage is on an island (Parting Eyot) between the lock and the weir.

The weir is almost level with the lock and runs straight across to the opposite bank from the other side of the lock island. 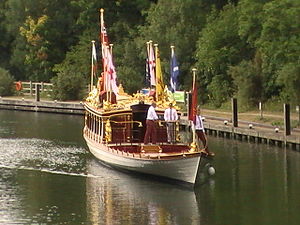 There was a mill recorded on the site in the Domesday book and in 1328 there was a reference to "Richard atte Lock of Bray" occupying a weir called Braibrok.[1] Fifty years later in 1377 there are records of travellers complaining of the excessive tolls at a flash lock on the site called Hameldon Lock.[1] Both the lock and the weirs were removed in 1510 by order of the Commissioner of Sewers.

In 1622 a new flash lock was built by Thomas Manfield[1] and presence of water pens is noted in 1632. Navigation may in earlier times have used York Stream which went on the other side of Bray to Maidenhead. A pound lock and weir were first proposed in 1833 for the "improvement of navigation two or three miles above". The fall between Maidenhead and Boveney was large, leading to shallows and a strong current. The towpath was on the Buckinghamshire bank, and navigation on the Berkshire side, so tow ropes had to pass across the island. The suggestion of a lock was made again in 1843 and a lock house built on Parting Eyot with an open-sided lock the following year. The miller contributed to the cost of the weir. The lock was often left open except when river levels were low and no tolls were collected.[2] Sides were added before 1877 and the lock and weir were rebuilt in 1885.[3] Prior to the rebuilding Charles Dickens had described Bray Lock as a "rotten and dangerous structure".[2] 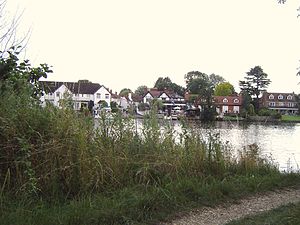 Bray from the River Thames

Immediately above the lock is Headpile Eyot. Bray is on the Berkshire bank while the Buckinghamshire bank has open fields. Further along the reach is Brunel's Maidenhead Railway Bridge, known as the "Sounding Bridge" from the spectacular echo underneath it. The Maidenhead bank is lined with large Edwardian houses up to Maidenhead Bridge beside which is the Skindles Hotel once a notorious rendez-vous for illicit coupling.[4]

Along the banks of the reach are multiple mansions and boathouses, many of which have been or are owned by high-profile British Celebrities such as Michael Parkinson and Rolf Harris.

Above the bridge are the islands of Bridge Eyot and Grass Eyot before Boulter's Lock with Taplow on the Buckinghamshire side.

The Maidenhead Regatta takes place below the railway bridge in August, and is followed by the annual Thames Punting Championships. The Maidenhead Junior regatta is held in May.

The Thames Path follows the Bucks (Eastern) bank to Maidenhead Bridge, which it crosses, and then proceeds on the Berkshire side to Boulter's Lock.