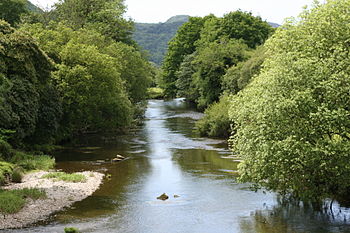 The River Dwyryd at Maentwrog

The River Dwyryd is a river in Merionethshire which flows principally westwards; draining to the sea into Tremadog Bay, south of Porthmadog.

The Dwyryd rises in the hills to the north of Ffestiniog. At its most northern extent, water draining from Moelwyn Mawr drains into the Tanygrisiau Reservoir, the outflow of which forms the source of the River Goedol. This is joined by the River Bowydd (SH695438). Below Rhyd y Sarn, the river is joined by the Afon Cynfal which flows from the east down a deep wooded gorge which includes a spectacular waterfall, Rhaeadr Cynfal, south of Ffestiniog. The main river from here on flows through a wide valley formed by glaciation but with a broad flat base formed from re-worked glacial moraines and riverine gravel deposits. The valley, the Vale of Ffestiniog, is worked for agriculture but is subject to routine winter flooding.

The Tafarn-helyg has its confluence about one mile further downstream. This tributary rises south of Gellilydan just north of the reservoir of Llyn Trawsfynydd but does not receive any water from the reservoir.

There are a number of small lakes and reservoirs in the woodlands north of Plas Tan y Bwlch which also drain south into the river. These lakes include Llyn y Garnedd, Llyn Hafod y Llyn and Llyn Mair.

Llyn Trawsfynydd, a large reservoir close to the A470, is the only inland water in the United Kingdom that has been used as a source of cooling water for a nuclear power station. The outflow from the Trawsfynydd reservoir, the Afon Prysor, flows down the steeply wooded valley of Ceunant Llennyrch before joining the main river at Maentwrog. A large part of the flow from the reservoir is channelled through the hydro-electric power station at Maentwrog and the flow from the station re-joins the Prysor before the confluence.

As the river moves into a long tidal estuary, it flows under the railway line. A former toll road and rail bridge known as Pont Briwet crossed the estuary before their removal in 2014. Due south of Portmeirion the river is joined by the Afon y Glyn which drains the southwest catchment from Llyn Tecwyn Uchaf and Llyn Tecwyn Isaf. The confluence is adjacent to Glastraeth (green beach) - a large extent of salt marsh.

The estuary of the Dwyryd is long and sandy and includes the confluence of the River Glaslyn close to the low water mark.

Geology and land use

The whole of the river drains off igneous and ancient rocks of the Cambrian and Ordovician which are all base-poor. Much of the catchment has also been used for commercial forestry during the last hundred years. As a consequence, many of the tributaries are highly acidic as a result of atmospheric acidification. This has constrained the quality of the fishery and the bio-diversity in many tributaries. Some of these problems have been exacerbated by past industrial actions including metal mining, slate mining, animal skin processing and the use by the army of a gunnery range with large amounts of implaced metal cartridge shells.