Congleton is a town in Cheshire which stands on the banks of the River Dane, to the west of the Macclesfield Canal and 21 miles south of Manchester. The town had a population of 25,750 at the 2001 census.

Of origin unknown, the first recorded reference to the town's name was in 1282, when it is spelled Congelton. The element "Congle" could relate to the old Norse kang meaning a bend followed by the element the Old English tun meaning settlement.[1]

Churches in Congleton include:

Stone Age and Bronze Age artefacts have been found in the town.[2]

Congleton became the local market town after Vikings destroyed nearby Davenport. Godwin, Earl of Wessex held the town in the mid-eleventh century.

The town is mentioned in the Domesday Book,[3] where it is listed as Cogeltone: Bigot de Loges. William the Conqueror granted the whole of Cheshire to his nephew the Earl of Chester. In the 13th Century, Congleton belonged to the de Lacy family.[2] Henry de Lacy, 3rd Earl of Lincoln granted the town its first charter in 1272, enabling it to hold fairs and markets, elect a mayor and ale taster, have a merchant guild and behead known criminals.[2]

In 1451, the River Dane flooded, destroying a number of buildings, the town's mill and wooden bridge.[2] The river was diverted away from the town, and the town centre was rebuilt on higher ground.

During the Civil War, former Congleton mayor and lawyer, John Bradshaw, became president of the court which sent King Charles I to be beheaded in 1649, as all the judges refused to take part. His signature as Attorney General was the first on the king's death warrant and so he is known as the chief of the regicides.[2] There is a plaque commemorating him on Bradshaw House in Lawton Street. Almost opposite the town hall, the White Lion public house bears a blue plaque, placed by the Congleton Civic Society, which reads: "The White Lion, built 16-17th century. Said to have housed the attorney's office where John Bradshaw, regicide, served his articles."[4]

Congleton became famous in the 1620s when bear-baiting, as well as cockfighting, were popular sports.[2] The town was unable to attract large crowds to its bear-baiting contests and lacked the money to pay for a new, more aggressive bear. The town used money it had saved to buy a new bible and it replenished the fund with the income from the increased number of spectators. It became legend that Congleton sold its Bible to pay for a new bear. The chorus of 20th century folk song "Congleton Bear",[5] by folk artist John Tams,[6] runs:

King Edward I had granted permission to build a mill. Congleton became an important centre of textile production, especially leather gloves and lace.[2] Congleton had an early Silk throwing mill, the Old Mill built by John Clayton and Nathaniel Pattison in 1753.[7] More mills followed, and cotton was also spun.Its prosperity depended on tarifs imposed on imported silk. When the tarifs were removed in the 1860s, the empty mills moved over to fustian cutting. A limited silk ribbon weaving industry survived into 20th century, and woven labels were still being produced in the 1990s. Many mills survive as industrial or residential units.[8]

The impressive Town Hall was designed, in the Gothic style, by Edward William Godwin. It was completed in 1866.[9] 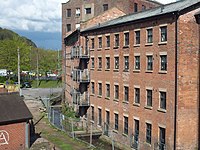 The town of Congleton is broken up by the Congleton townspeople into seven main areas. These are Buglawton, otherwise known as "Bug Town";[10] the Bromley Farm estate, otherwise known as "Tin Town" due to the number of tin RSJs built there; Mossley, which is sometimes classed as the wealthier part of town; Hightown, which is located before Mosley between town and the railway station; West Heath, which is a relatively new estate built in the late 1970s to the early 1980s; Lower Heath to the north of the town; and finally the town centre.

The principal industries in Congleton include the manufacture of airbags and golf-balls. There are light engineering factories near the town, and sand extraction occurs on the Cheshire Plain, although much of the town is now a dormitory for Manchester and Stoke-on-Trent.

Congleton Market operates every Tuesday and Saturday from the Bridestones Centre. 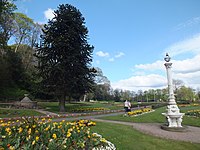 Congleton Park from the Jubilee Pavilion

Congleton Park runs along the banks of the River Dane just north east of the town centre. Town Wood on the northern edge of the park is a Grade A Site of Biological Interest and contains many nationally important plants.[12] Congleton paddling pool was built in the 1930s and is open in the summer months.

Astbury Mere Country Park lies just to the south west of the town centre, on the site of a former sand quarry.[13][14] The lake is used for fishing and sailing and despite its name, is actually in the West Heath area of Congleton, with the boundary between Congleton and Newbold Astbury parishes lying further to the south.

The National Trust Tudor house Little Moreton Hall, lies 4 miles to the southwest of the town.[15]