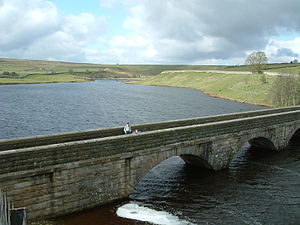 Lunedale is the dale of the River Lune in the north-westernmost parts of the North Riding of Yorkshire, on the east side of the Pennines. It also forms a township that occupies the most northerly point in the county. The dale carries the river down from close to the Westmorland border eastwards down to Teesdale, on Yorkshire's border with County Durham, where the Lune enters the River Tees.

Yorkshire's own highest point, Mickle Fell, overlooks the head of Lunedale and many of the streams which unite to create the river Lune rise on its southern slopes.

The dale opens out into Teesdale between Laithkirk and Mickleton.

The principal villages of the dale are Grassholme, Thringarth and West Pasture; all barely more than hamlets, with a total population (including Holwick) recorded by the 2011 census as 187.

The dale has been harnessed to provide two reservoirs; the Victorian Grassholme Reservoir and the Selset Reservoir, built in the 1950s.

Running roughly parallel to Lunedale to the south is Baldersdale. The Pennine Way running north enters successive Yorkshire dales, running from the Greta Valley up and over to Baldersdale then over to Lunedale, crossing the head of the Grassholme Reservoir on the Grasholme Bridge at Grassholme. From here it continues north to Teesdale (at Middleton-in-Teesdale).

A former railway viaduct from the now-closed Barnard Castle to Middleton-in-Teesdale line crosses the River Lune just north of Mickleton.