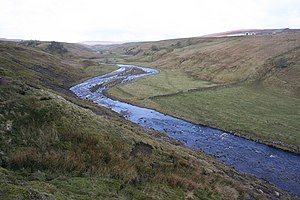 The River Lune is a river in the North Riding of Yorkshire, which is a tributary of the River Tees. It cuts a valley, Lunedale, through the Pennines down into Teesdale.

The Lune rises close to Lune Head Farm at the confluence of Lune Head Beck (considered by some the upper part of the Lune)[1] and Cleve Beck. Lune Head Beck itself is formed by the meeting of Connypot Beck and Goal Sike, flowing eastward from Westmorland.

The river flows eastward through Lunedale to Selset Reservoir, after which it turns north east and feeds Grassholme Reservoir, before continuing to join the River Tees by Mickleton.