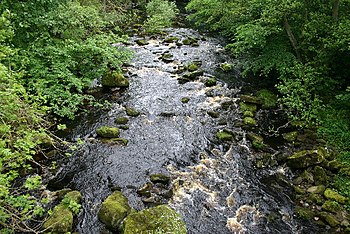 The Great at Brignall Banks, above Scargill

The River Greta is a river in the North Riding of Yorkshire, and a tributary of the River Tees.

The river rises in the Pennines, created by the joining of numerous Pennine burns from the farthermost western moors of Yorkshire and from the edge of Westmorland.

The Greta drains Spittal Ings, Roper Castle (or Round Table) and Beldoo Moss to the east of Moudy Mea, before running east through Stainmore Forest. It is joined at West Charity Farm by Sleightholme Beck, its main tributary, which runs north-east from its source between Bog Moss and Sleightholme Moor where it is formed by the confluence of Dry Gill and Frumming Beck. From there, the river travels through Bowes, where, close to the site of the Roman fort of Lavatris it is crossed by the Pennine Way. 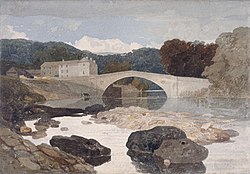 The area through which the Greta flows was a favourite haunt of artists, notably John Sell Cotman[1] and J. M. W. Turner.[2][3][4]

There are many historic sites adjacent to the river including cup and ring carvings on Barningham Moor, an early Norman]] Keep at Scargill, the site of a Roman shrine on Scargill Moor (now in the Bowes Museum and a 17th Century watermill, Brignall Mill, which is now a holiday cottage.

Villages by the river

The Greta at the Meeting of the Waters