Ludford is a village and civil parish in the Lindsey part of Lincolnshire. The civil parish comprises the ancient parishes of Ludford Magna and Ludford Parva in the Wraggoe Wapentake.

In 1885 Kelly's Directory noted the two separate settlements and parishes of Ludford Magna and Ludford Parva, both using the Church of SS Mary and Peter at Magna, a previous church at Parva showing no remains. The rebuilt church is described as containing a chancel, nave, transepts, a turret with one bell, and a south porch. A "handsome" stained-glass window had been placed in the church by the inhabitants of the village in memory of a former rector. The living was combined with that of Parva, with the church register dating from 1696. Parva contained a Wesleyan and a Free Methodist chapel. A National School at Magna, built in 1853 and enlarged in 1874, held 150 children, with an average attendance of 130. The land of both parishes was described as heavy, and mixed with flint and chalk. Parish area for Magna was 2,860 acres, and that for Parva, 836 acres, chief crops grown being wheat, barley, oats and turnips. The 1881 population for Magna was 390, and for Parva, 341.[2]

Ludford primary school was built as Ludford National School, and had become Ludford Church of England Primary School in 1999.[3] The primary school was one of a few in the country to be involved with the Science and Technology through Educational Links with Amateur Radio education charity.[4] The school was closed in 2009 because of declining pupil numbers, and after a local campaign to prevent closure was unsuccessful.[5]

Montagu C. Allwood and his brothers, who grew up in a farming family in the village, moved to south of Burgess Hill in Sussex to build a plant nursery, which is now the largest retailer of carnation plants in the world. At the time the Allwoods lived in the village, the population was twice that of now. 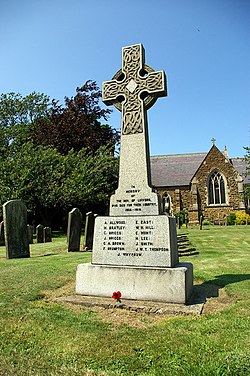 RAF Ludford Magna was a former Royal Air Force airfield situated south of the village, next to east side of the B1225 High Street. The station opened in June 1943.[6][7]

During the Second World War, Lancaster bomber air crew from the RAF Ludford Magna were shot down and killed over Voué in France. The villagers of Voué buried the air crew and tended the graves for many years until the link with Ludford was discovered. Ludford and Voué are now twinned, with regular visits between the two. There is a No. 101 Squadron RAF reunion every year in early September, with a fly past over the village of a Avro Lancaster PA474 from RAF Coningsby, the only bomber remaining in the Battle of Britain Memorial Flight. There is a memorial stone for the base in the village. The squadron suffered the greatest number of casualties of any RAF Bomber Command squadron.[7]

During the Cold War the station was home to Thor Intermediate Range Ballistic Nuclear Missiles, each with 1.44 megaton warheads.[6][7]

On 27 February 2008 at 00.26 am Ludford was at the epicentre of an earthquake measuring 5.2 on the Richter scale. Despite the strength of the earthquake no damage was sustained to the village.[8][9] To celebrate the village's place in UK earthquake history, the White Hart Inn commissioned a beer that was brewed by a local microbrewery.[10][11]

Ludford sits on the mile-long (Magna Mile) section of the east to west A631 Market Rasen to Louth road.

The village is in an area of outstanding natural beauty at the northern edge of the Lincolnshire Wolds. From the B1225/A631 crossroads, to the west of the village, the parish boundary follows the B1225 northwards, bordering North Willingham. It briefly borders Tealby along the B1225, the parish boundary moves from the B1225 eastwards through Kirmond Hall, bordering Kirmond le Mire. South of Walmsley Holt the boundary passes south of Spottle Hill Farm and Low Farm, and east of Tows Farm, at Great Tows on the road to Ludborough, it meets Calcethorpe with Kelstern. It crosses the A631 around two miles west of the village centre. At this point it follows the start of the River Bain southwards, east of the deserted mediæval villages of West Wykeham and East Wykeham, which are part of the parish. At Bain Wood, where the two tributaries of the River Bain meet, it meets Burgh on Bain. It passes north-west along the eastern edge of Wykeham Plantation, on the western edge of Wykeham Pond, and along another (western) tributary of the River Bain, south of the deserted West Wykeham. It crosses Girsby Lane to the south-west, and then south-west along the western edge of Harpgates Plantation and the eastern edge of the RAF Ludford Magna, until it meets the B1225 and Hainton. A mile north along the B1225 it meets Sixhills. West of Gally Hill Farm it meets North Willingham.

The parish church is dedicated to St Peter and St Mary, and has the 101 Squadron Roll of Honour.[6] The village public house, on the A631, is the White Hart Inn.