Burgess Hill is an inland town of Sussex, in the Weald, on the edge of the South Downs National Park. It is 10 miles north of Brighton and had a population of 28,803 at the time of the 2001 Census. Other nearby towns include Haywards Heath to the north east and Lewes to the southeast.

It is a local centre, and the amenities and shops of Burgess Hill are also well used by the surrounding villages.

Burgess Hill is in the Sussex Weald, 10 miles north of Brighton, and about 4.5 miles south of Haywards Heath. Gatwick Airport is 16 miles off.

One of the tributaries of the River Adur weaves its way through the town, known locally as Hambrook. The town is a nuclear settlement, radiating out from the centre, curbed on the western side by the ring road.

The northern central side of the town (around Wivelsfield railway station) is known as Worlds End. It is a name that come with the railway, reflecting its remotesness from either end of the line or any town, at the time. Here in 23 December 1899 a serious accident happened when a red signal was obscured by thick fog and a train from Brighton collided head-on with a boat train from Newhaven Harbour at 40 mph, six passengers were killed and twenty seriously injured.

Although a Roman road, the London to Brighton Way was built connecting London to the South coast and passing through what is now Burgess Hill, there is no evidence that the Romans settled.

Burgess Hill originated in the parishes of Clayton, Keymer and Ditchling - all of them mentioned in the Domesday Book. The town's name comes from the Burgeys family when the name John Burgeys appeared in the tax rolls. The name of Burgeys stood for 'burgess', the inhabitant of a borough. By the Elizabethan period a community had established itself and many buildings dating from this era still stand.

The few buildings in the area were the two farmhouses, at Hammonds Ridge (still standing as a residence) and one at Queen's Crescent, in the west of what is now Burgess Hill. But until the nineteenth century, the town was known as St John's Common, and much of what is now the town centre was common land used by the tenants of Clayton and Keymer manors for grazing and as a source of fuel. Buildings which supported the common land were the King's Head pub, a blacksmith's forge, and several cottages.

From the fourteenth century or earlier the annual Midsummer Fair was held on this common land on 24 June: the feast of the birth of St John the Baptist. The last such sheep and lamb fair was held in 1913.

This sheep and lamb fair was the first of the year in Sussex, and there was much interest. It is said that farmers from as far afield as Hastings to the east and Findon to the west visited, and at its peak, more than 9000 lambs were sold at the fair, together with numerous horses, cattle and sheep.

With the development of the London to Brighton mainline railway, however droving ceased as transport by rail was more cost effective and most livestock trading began to centre around railside markets such as those at Hassocks, Haywards Heath and Lewes railway stations. By the dawn of the 20th century, the livestock trading business had all but left the Burgess Hill area.

By the early seventeenth century small scale brick and tile manufacture was flourishing and during this time parcels of common land were allocated for house building and small businesses. By the early eighteenth century brick making had been extended and four shops and one or two alehouses established on the common. Craftsmen such as smiths, shoemakers and weavers also worked there. Brickmaking by hand was still undertaken until very recently, by Keymer Tiles (formerly the Keymer Brick and Tile company) whose tiles can be found in buildings such as St. James Church, Piccadilly and Manchester Central Station (now G-Mex).

The growth of Brighton in the late eighteenth and early nineteenth centuries brought an influx of professional men looking for places to live. With accessibility, the common was ripe for development with the result that the Keymer and Clayton portion were enclosed in 1828 and 1855 respectively. Between 1850 and 1880 the area changed from an insignificant rural settlement to a town of 4,500 residents. In 1857, in an area now known as either 'the top of the town', or Hoadley's Corner, the Hoadley family established a large department store, of which the original building still stands, on the corner of Station Road and Junction Road, then opened branches at nearby Ditchling, and Seaford too.

The Wynnstay Hydropathic Institution, known as the Hydro for short opened as a nature cure establishment, and remained until 1909, when the business was moved to Franklands.

In 1897 the Victoria Pleasure Gardens were opened in honour of Queen Victoria's Diamond Jubilee, and contained a large lake, which covered 3 acrea, and what can only be described as a small early version of a roller coaster, known as a switchback. The lake was used for boating in the summer, and skating in the winter. (This area is now the Victoria Business Park.)

Twentieth century and beyond

The town gradually enlarged, growing grostequely after the War and throughout the century: Burgess Hill became the fastest growing town in the south-east. The Triangle, a large leisure and conference centre was built in the northwest of the town and opened by The Queen in 1999. 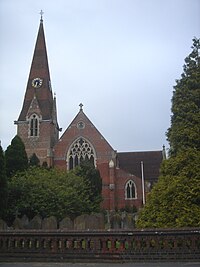 There are nine churches in Burgess Hill: 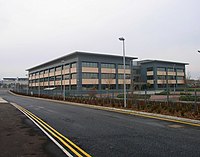 Burgess Hill is home to the offices of many national and international companies, many based at one of the four business parks in and around the town, organised by the Burgess Hill Business Parks Association. Altogether the Business Parks Association, representing about 200 companies, employs approximately 8000 people, with a combined yearly turnover of 2 billion pounds.[2] Victoria Business Park is the larger of the two parks in the town, to the south west, with the smaller Sheddingdean Business Park to the north. The town’s residents may also commute to Ditchling Common Industrial Estate, another small business park just over the county border, or the Bolney Business Park, located off the A2300 between Burgess Hill and Hickstead. Both of these are also associated with the aforementioned organisation. 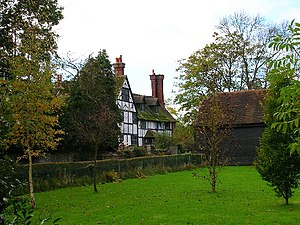 Almost all the Victorian detached houses and workmen's terraced cottages built in the second half of the nineteenth century (when the town was renowned as a health resort) have survived.

Providence Strict Baptist Chapel, one of many former Strict Baptist chapels in Sussex, closed in 1999 after 124 years of religious use. The Grade II-listed Neoclassical building was designed by Simeon Norman in 1875.[3] 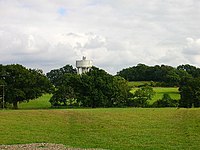 Burgess Hill contains two nature reserves, Bedelands and Batchelors Farm and on the east side of town is Ditchling Common Country Park, a 188-acre area of common land, set up in 1975.

In the town centre the largest park is St John's Park, with other smaller recreation grounds around the town.

Burgess Hill is one of the few towns to retain an independent cinema. The Orion Cinema,[4] opened in 1928, has two screens and shows a mixture of mainstream and arthouse films. There is also a local theatre, which puts on productions quarter-yearly, the most popular of these being a pantomime, performed in the Martlets Hall.[5] Musical theatre productions by Burgess Hill Musical Theatre Society (formerly Burgess Hill Operatic Society) are also held at the Martlets Hall.[6]

The town is also home to the Mid Sussex Brass Band which has a second section contesting main band and a thriving youth band. As well as supporting local fetes and concerts, the band plays at concerts throughout the year in venues from Horsham to Hever Castle.

Burgess Hill has a Symphony Orchestra, which draws its members from Burgess Hill and the surrounding area. The Orchestra puts on two classical concerts each year, normally in May and November.[7] Burgess Hill Choral Society perform two concerts every year, shortly before Christmas and in April or May.[8]

The skate park in the centre of town provides sporting opportunities, and holds an annual competition.

The Triangle was one of the venues in the South East supporting the London 2012 Olympic Games, and served as a base and training centre for teams from around the world.