Glas Maol is the highest point in the Mounth hills, in the south-eastern part of the Highlands, the summit marking the meeting of Aberdeenshire, Angus and Perthshire. It is the county top of Angus.

The summit is broad and flat with a dry-stone shelter to protect the climber against the vicious winds which tear across it.

The western slopes of Glas Maol form part of the Glenshee Ski Centre ski area. The most common route of ascent goes through the slopes, starting from the highest point of the A93 road, the Cairnwell pass. This is the highest public road in Scotland and therefore only around 400 yards of ascent is involved to reach the summit, though the weather can be as unforgiving as on a major climb. 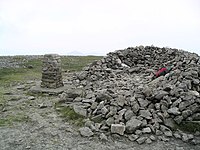 Glas Maol is often climbed in conjunction with Creag Leacach to the south or Cairn of Claise to the north. The broad ridge linking these peaks is topped by a dry-stone dyke, which approximately corresponds to the border of the county of Angus.