Little Missenden is a village and parish on the River Misbourne in the Aylesbury Hundred of Buckinghamshire. It is in the Chiltern Hills, about three miles south-east of Great Missenden and the same distance west of Amersham.

The main London – Aylesbury road used to run through the centre of Little Missenden and past the two pubs – The Red Lion and The Crown. Early in the 19th century a new by-pass road was built to the north and this now forms part of the modern A413 road.

The toponym "Missenden" is probably derived from the Old English for "valley where water-plants (or marsh-plants) grow".[2] 11th-century spellings include Missedene and Messedena, and a later version is Musindone.[3]

The Domesday Book of 1086 records Missedene without distinguishing the two villages, but three manors of Little Missenden are identifiable as having existed by the reign of King Edward the Confessor (1042–66). William the Conqueror granted one hide of land around what is now Town Farm to his half-brother Robert, Count of Mortain. After Domesday it evolved as the manor of Holmer, whence the hamlet of Holmer Green arose.[3]

The manor of Mantells was half a hide and was held by the Mantell family. Another half-hide in Little Missenden had been held by Wulfwig, Bishop of Dorchester, but by 1086 was held by Hugh de Bolebec.[3]

By the early 14th century a fourth manor, Beamond, had emerged, probably from part of the Mortains' manor. It was held by the Augustinian Bicester priory until 1536, when it surrendered its estates to the Crown in the Dissolution of the Monasteries. Its name survives in Beamond End.[3] 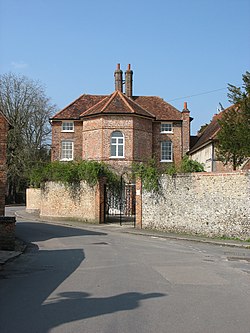 The current Little Missenden Manor house originated in the 16th century as a late-mediæval timber-framed hall house. In the 17th century it was extended in red brick, and retains gables and a staircase from that period.[4] The house was refaced in the 18th century.[5]

Missenden House is a red and grey brick building completed in 1729.[6] Little Missenden Abbey is a Tudor Revival house built by William Howard Seth-Smith I.[4]

The Church of England parish church of St John the Baptist is a flint building with limestone dressings. Its nave is 10th-century Saxon, built about AD 975. Its plain chancel arch is also Saxon and its imposts are re-used Roman bricks. The aisles, with their Norman arcades, were added in the 12th century: the south first, and the north slightly later.[7] The Aylesbury-style font is also 12th century.[8]

The chancel is now Early English,[7] having been rebuilt in the 13th century. The north chapel was added early in the 14th century. The west tower and timber-framed south porch are 15th-century.[8][9]

The exterior of the south aisle was rebuilt in brick in the 18th century. On the north side of the church is a modern vestry designed in 18th-century style by Quinlan Terry.[8] The church is a Grade-I listed building.[8] 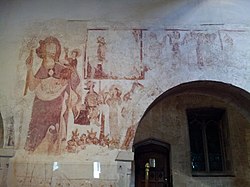 Paintings on the north wall of the nave, with St Christopher on the left

The wall paintings were whitewashed in the 16th century in the Reformation. In 1931 they were rediscovered and Prof. EW Tristram was called in to uncover and restore them. One painting eluded Tristram: A Doom painting in the customary position over the chancel arch at the east end of the nave. In 2017 traces of a 14th-century Doom were finally discovered, over the chancel arch, hidden behind old plaster.[10]

The west tower has a ring of six bells. John Rufford of Toddington, Bedfordshire cast the third bell in about 1380. The successor of John Danyell of London cast the fourth bell in about 1470. Joseph Carter of Reading, Berkshire cast the fifth bell in 1603. Ellis II and Henry III Knight of Reading cast the tenor bell in 1663. John Warner & Sons of Cripplegate, London cast the second bell in 1881.[11] That made a ring of five[3] until 1948, when Mears and Stainbank of the Whitechapel Bell Foundry cast the present treble bell.[11]

The village has been used in many films and television programmes over the years, particularly as one of the more frequent ITV Midsomer Murders filming locations. "Missenden Murders" was considered as a possible title for the series.[12] The Red Lion pub has appeared in three episodes.[13] A house in the village was used for long shots of the home of Barnes Wallis in The Dam Busters (his real house was in Effingham, Surrey)[14].

The nearest railway station is at Great Missenden on the Chiltern Main Line.