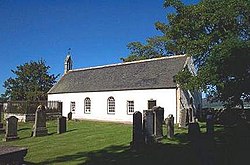 Kincardine is a parish 14 miles north-west of Tain in Ross-shire. It also comprehends two detached parts of Cromartyshire (Nos. 11 and 12). This place perhaps derives its name, of Celtic origin, signifying "the termination of the heights", from its situation at the extremity of some ranges of lofty hills. The parish contains the settlements of Ardgay, Croik and Culrain. The hamlet of Kincardine lies ¾ mile south-east of Ardgay.

The northern border of the parish coincides with the border between Ross-shire and Sutherland, whereas the southern borders are with the Ross parishes of Edderton, Rosskeen, Alness, Fodderty, Contin and Lochbroom.

The River Carron and its tributaries from their source to the Kyle of Sutherland lie entirely within the parish. The A836 road runs along the eastern boundary and crosses the Kyle of Sutherland at Bonar Bridge. The Far North railway line from Inverness to Thurso and Wick also follows the same route but continues north to Culrain before crossing the Kyle at the Shin Viaduct. Railway stations are to be found at Ardgay and Culrain.

This Ross-shire article is a stub: help to improve Wikishire by building it up.
Retrieved from "https://wikishire.co.uk/w/index.php?title=Kincardine,_Ross-shire&oldid=51888"
Categories: