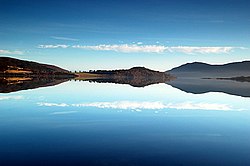 The Kyle of Sutherland, near Ardchronie 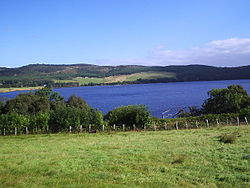 Kyle of Sutherland (Gaelic: An Caol Catach) is a remarkable sea-loch or tidal river estuary that separates Sutherland from Ross-shire. The Kyle enters the Dornoch Firth and is fed by the rivers Oykel, Shin, Cassley and Carron.

The lowest point of the Kyle of Sutherland is reckoned at the bridge at Bonar Bridge, below which is the Dornoch First. From here upstream the Kyle reaches twelve miles inland to its tidal limit which corresponds to 'the bailey bridge' at Inveroykel, southwest of Rosehall.[1] Above the tidal limit is the River Oykel, which marks the county boundary further up.