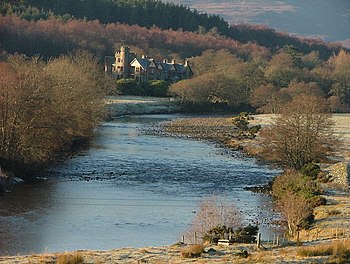 The Carron at Gruinards Lodge

The River Carron is the name of two rivers in Ross-shire, but while the waters of the Carron of Easter Ross flow eastward to the Kyle of Sutherland and the North Sea, that of Wester Ross flows south-west to Loch Carron and the Atlantic Ocean.

The Easter Carron rises amongst the craggy tops of Easter Ross in many burns which join and flow eastwards by the name of Abhainn a' Ghlinne Mhòir. This joins with the Alladale River by the Amat Forest to form the River Carron.

The Carron is joined by innumerable streams on its course, including the Water of Glencalvie and the Black Water, which joins it at Amat Lodge and the hamlet of Amatnatua, on the edge of the woodland. From here it carves a gorgeous valley named Strathcarron, describing an elegant curve for many miles eastwards.

On the south side of Strathcarron are two estates anciently held by the Earls of Cromartie: at Amatnatua; and between Gruinards Lodge and Wester Gruinards. These form detached parts of Cromartyshire. On the north bank are extensive planted woodlands. 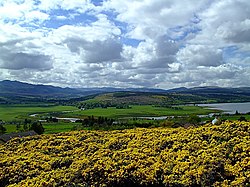 The River Carron leaves Strathcarron only close to the mouth of the river at Invercarron. It enters the tidal waters of the Kyle of Sutherland opposite Bonar Bridge, the Kyle forming the border with Sutherland.

The River Carron is used for salmon fishing and kayaking.