Kelso Abbey is a ruined abbey in Kelso, Roxburghshire. It was founded in the 12th century by a community of Tironensian monks first brought to Scotland in the reign of King Alexander I. It occupies ground overlooking the confluence of the Tweed and Teviot waters, the site of what was once the Royal Burgh of Roxburgh and the intended southern centre for the developing Scottish kingdom at that time. Kelso thus became the seat of a pre-eminently powerful abbacy in the heart of the border country.

In the 14th century, Roxburgh became a focus for periodic attack and occupation by English forces and Kelso's monastic community survived a number of fluctuations in control over the area, restoring the abbey infrastructure after episodes of destruction. From 1460 onwards, life for the abbey appears to have grown more settled, but it came once again under attack in the early sixteenth century. By the mid-century, through a turbulent combination of events, the abbey effectively ceased to function and the building fell into ruin.

Although the site of Kelso Abbey has not been fully excavated in modern times, evidence suggests that it was a major building with two crossings. The only remains standing today are the west tower crossing and part of the infirmary. The massive design and solid romanesque style of the tower indicate a very large building of formidable, semi-military construction and appearance, evidence of the importance with which Roxburgh was regarded when the abbacy was at the height of its power. 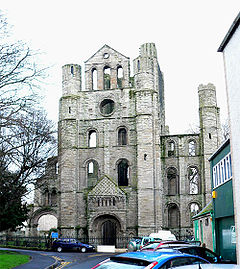 The north transept of the west crossing

Kelso Abbey was founded at Roxburgh in 1128 by a community of monks of the Tironesian order, from Tiron, near Chartres, in France. The community had first entered Scotland, c. 1113, under the patronage of David I as Prince of the Cumbrians during the reign of his brother, Alexander I, when the monks were given a commission to found their community at a site near Selkirk.[1] It is not known for certain why the community came to abandon this first site in 1128, although David, now King of Scots, was developing Roxburgh as a major economic and administrative centre for Southern Scotland. Other institutions established by David at Roxburgh included the royal mint.

Construction of the abbey is believed to have commenced immediately, and by 1143 progress was sufficiently advanced for the building to be dedicated to The Blessed Virgin and Saint John. The King's son, Henry, Earl of Northumbria, who predeceased his father, was interred in the abbey in 1152.[2]

Kelso Abbey, which was situated in sight of Roxburgh Castle across the Tweed, soon grew to be one of the wealthiest and grandest in Scotland, with much of its income coming from its vast estates in the Border country. John, Abbot of Kelso from 1160 to 1180, was the first abbot in Scotland to be granted the mitre.[3]

After Scotland's royal dynasty began lose power in England’s northern shires during the reign of King King William I of Scotland, David's southern "capital" came into close proximity to the border with the Kingdom of England and was subject to attack during the wars which followed the extinction of the royal line. In 1299, the abbot of Kelso was the English appointee, Thomas de Durham (1299–1307). Throughout this turbulent period, Roxburgh Castle and Berwick upon Tweed, the major Scottish port serving the area, were frequently under English occupation. Whenever the abbey was subject to attack, the damage was repaired by the monks.

In 1460, James II was killed within sight of the abbey as the result of a fatal accident during the campaign which secured repossession of Roxburgh castle that same year. Kelso Abbey was the venue for the hasty coronation of the infant king, James III, which quickly followed. During the period 1460 to 1513, political and military control in the area was more stable and life for the abbey was probably relatively settled. After 1517, however, it was again subject to English attacks.

12th C bell found in a field near the Abbey

Kelso Abbey effectively ceased to function due to a combination of events in the mid-sixteenth century. First, in the 1540s, the building sustained major damage in attacks perpetrated under the orders of the English king, Henry VIII, part of the so-called Rough Wooing, in which most of southern Scotland's abbeys, including those at Melrose, Dryburgh and Jedburgh, were targeted for destruction by forces under the command of the Earl of Hertford. This physical assault was followed around ten years later, in 1560, by monastic disestablishment under the Scottish Reformation, from which time the Tironensian community at Kelso was no longer officially recognised.

A small remaining contingent of monks may have continued at the site for a number of years following the 1560 dissolution, but after further attacks and damage the abbey was declared officially derelict in 1587. By the late 16th century the estates of the former monastery came under fully secular control when, in 1607, they were finally granted as a secular lordship, titled Holydean, to the last commendator of the abbey, Robert Ker of Cesford.

Between 1647 and 1771, part of the abbey ruins were occupied by a parish kirk, with other parts of the structure being dismantled and used as a source of stone by locals for buildings in the town of Kelso. The post-reformation kirk appears to have been a compact vaulted structure intruded within the west transepts in about 1748. This adapted structure included a vaulted gaol. 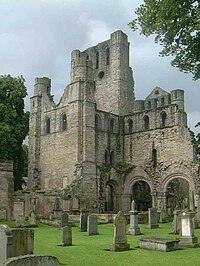 In 1805, huge parts of the ruins were cleared away, including the parish church and the gaol, leaving only the abbey's west tower and transept remaining to this day. A more recent addition (1933) has been a memorial cloister to the 8th Duke of Roxburghe built in the original style of the cloisters when the abbey was first built, and designed by Reginald Fairlie.

Little of the ground plan of this once large abbey exists, but the surviving ruin of the west tower, together with its crossing, is impressive and shows a building that was strong and fortress like. Evidence from Vatican archives, dated 1517, indicates that the complete building had two crossings, west and east, each with single towers, a double-cruciform design that was relatively rare in Europe. The high altar of the abbey would have been at the east tower crossing. Although the east end does not survive, it may have been in a rounded form if, as would be expected, the firm Romanesque design of the extant western tower was consistent throughout the building.

The gable of the north transept of the west tower crossing presents the most intact surviving face. The earliest remains of the abbey are the two bays of the south arcade of the nave (partly visible at the far left of the picture). These have rounded arches dating from about 1128. Later additions above this are a triforium from the late 12th Century, and above this clerestory is a continuous arcade. There is no regular vertical pattern between three levels of arcading; a feature which is unique in Great Britain.[2] The masonry above the clerestory suggests that there was no nave vaulting.

The south and west faces of the west tower still rise high to the level of the belfry openings and this structure is not earlier than the beginning of the 13th Century.[2] The west transepts and the west vestibule also survive, though only the north jamb survives of the west crossing's doorways.

The ruins are cared for by Historic Scotland. There is no entrance charge.

This Abbey is part of five other abbeys and historic sights though Scotland on Borders Abbeys Way walk.