Dryburgh Abbey, near Dryburgh in Berwickshire stands in a loop in the River Tweed opposite St Boswells. The abbey was nominally founded on 10 November (Martinmas) 1150 in an agreement between Hugh de Morville, Lord of Lauderdale and Constable of Scotland, and the Premonstratensian canons regular from Alnwick Abbey in Northumberland.[1] The canons along with their first abbot, Roger, arrived on 13 December 1152.[2]

The abbey was burned by English troops in 1322, after which it was restored only to be again burned by Richard II in 1385. It flourished in the fifteenth century. It was finally destroyed in 1544 during the Rough Wooing, briefly to survive until the Scottish Reformation, when it and its lands were given to the Earl of Mar by King James VI.

The 12th Earl of Buchan bought the land in 1786. Sir Walter Scott and Field Marshall Douglas Haig are buried in its grounds. 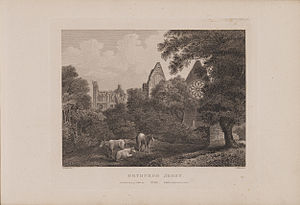 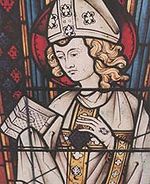 The Premonstratensian order was founded by St Norbert of Xanten who was firstly a canon at Xanten Cathedral. Unhappy with the way of life of his fellow canons, he left the Rhine lands for the diocese of Laon, in the north of France where the reforming Bishop Bartholomew was transforming his see into one that was more apostolic.[3] Bartholomew persuaded Norbert to form a canonical order at Prémontré, in Aisne in 1120 and while the order was Augustinian in form, the canons wore the white habit and not the black.[4] They followed an austere monastic life, but had a duty to preach and teach to those on the outside of the monastery walls.[4] The order spread rapidly across Europe with the Abbot of Prémontré becoming Abbot-General for all of the daughter-houses.[4] Even before the first Abbot-General Hugh of Fosse died, one hundred and twenty abbots attended the annual general chapter.[5] The Premonstratensians took on many of the methods of the Cistercians including land management and the use of lay-brothers to undertake the labour-intensive work of the communes.[6] 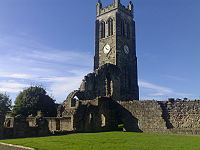 While nearby Melrose Abbey had royal patronage, Dryburgh was founded by Hugh de Morville, and while he was a very wealthy noble, he could not endow Dryburgh on the same scale as that of a monarch.[7] However, it seems that King David I of Scotland was not unsympathetic to the monastery; it is recorded in a charter that as well as confirming various donations from de Morville's wife, Beatrice de Beauchamp, the king allowed the abbey to take freely, timber from his forests for the building work.[8] Hugh gave the lands of Dryburgh containing the forests, grasslands and accompanying waters; the fishings from Berwick; the churches with their lands at Mertoun and Channelkirk in his lordship of Lauderdale and Asby in Westmoreland; and the earnings from the mills of Saltoun and Lauder.[9] Beatrice gave the income from the church at Bozeat in Northamptonshire to the abbey [10] as well as lands at Roxburgh that she bought solely for the purpose of subsequent donation.[11]

Hugh, in around 1162, like some other magnates of the period, turned his back on worldly affairs and entered the abbey-church, adopting the habit of the canons.[12] He gave his elder son, Richard, his large Scottish estates while his younger son, Hugh, received those in England.[13] Hugh, the senior, died at Dryburgh Abbey that same year.[14]

Following Hugh's death, his son Richard assumed the duties of patron to the abbey and created new foundations; the hospital of St Leonard near his castle at Lauder[15][16] and then the abbey of Kilwinning.[17] Kilwinning Abbey was built on a grand scale but with too small an endowment;[18] after Richard had granted a further endowment from his estates, a dispute broke out between Kilwinning and Dryburgh over Kilwinning's right to a share in the tythes from the church of Lauder.[19] Richard de Morville's establishment of this second monastery ensured that both establishments would remain in a state of relative poverty.[20]

Dryburgh Abbey managed to attract a continuous flow of novices to bolster the numbers of canons, so much so that by closing years of the 12th century the abbey was overcrowded necessitating the establishment of colonies.[21] John de Courcy, the Earl of Ulster installed a colony at Carrickfergus and a second at Drumcross[22] but neither flourished in the longer term and this is put down more to the constant political convulsions throughout 13th century Ulster rather than any problems at the mother house.[21] 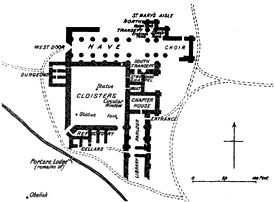 Ground plan of Dryburgh Abbey.
At the beginning of the 13th century, like its near neighbour Melrose Abbey, the abbey of Dryburgh commenced on a rebuilding programme on a grander scale, but building in stone against a background of an insecure income soon ensured that the construction work would not be completed quickly.[23] Also at this time, the monastery became embroiled in a series of legal proceedings regarding land ownership and tythe revenues resulting, in April 1221, in the Pope's legate having to spend some time at Dryburgh to adjudicate.[24] The construction effort was protracted and endured into the 1240s and with debts continuing to mount to the point that David de Bernham, Bishop of St Andrews gave Abbott John permission on 21 April 1242 to appoint his canons as vicars to the supporting churches stating [25]

… since they have been burdened by grinding debts both on account of construction of the monastery and also on account of other and various necessities.

Pope Innocent IV granted to the abbey in 1246, on the anniversary of its consecration, an indulgence lasting forty days intended to attract visitors who would hopefully be generous with their alms-giving.[26] Additionally, he also provided a suspension of the requirements to create pensions and benefices that might deplete the abbey's revenues, and importantly, safeguarded the monastery, its property and the canons themselves against legal redress.[27]

Abbott John was blamed for ineffectual financial management and was required to resign and, on 13 January 1255 Pope Alexander IV wrote to the Bishop of St Andrews (position vacant at the time) and to Nicholas de Prenderlathe, abbot of Jedburgh demanding that most of the abbey's income be diverted to paying off debts while only a basic level of income was to be retained for day to day expenses.[28] Slow improvement in the abbeys finances took place over the next forty or so years in a period of relative stability. However this improvement was only relative; Dryburgh's neighbouring monasteries with their much more extensive grazing lands provided the main source of a much greater income.[29] 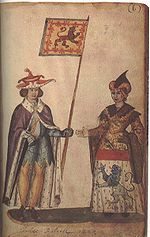 John Balliol and his queen

Hugh de Morville's line had died out in 1196 on the death of his grandson, William, and the estates passed William's sister, Helen, whose husband was Lochlann, Lord of Galloway. The semi-independent Lords of Galloway were much wealthier than the de Morvilles yet unable to spend freely on all of their dependencies, which already included four religious houses in Galloway and an association with Holyrood Abbey in Edinburgh, and the abbey of Holmcultram and the priory of St Bees in Cumberland.[30]

In 1234 Alan, the last of the line of Galloway lords, died and his estates were divided, leaving patronage of Dryburgh to Devorguilla of Galloway, mother of John Balliol, whose main concern was her own foundation, Sweetheart Abbey in Kirkcudbrightshire.[31] but she was at Dryburgh in 1281 to settle her lands in England on her son, John Balliol, the future king.[32] The end of John's brief reign and the wars which followed left Berwickshire peaceless for centuries. 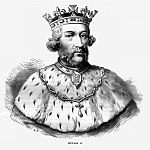 The abbotts of Dryburgh, Jedburgh, Melrose and Kelso all submitted to Edward I on 28 August 1296 at an event later to be described as the Ragman Rolls,[33] and so on 2 September Edward ordered that lands belonging to the abbey of Dryburgh be restored.[34] From this point up to the year 1316, very few records of the abbey exist, however it is known that Sir Henry de Percy, an English commander, placed himself and his cortege at Dryburgh in 1310.[35]

After Robert Bruce became king, he used the abbey as a base in July 1316 while conducting raiding expeditions into Northumberland.[36] In retaliation, in July 1322 King Edward II of England marched to Edinburgh in on its retreat through Lauderdale the army looted and burned both the abbeys of Melrose and Dryburgh.[37] Melrose Abbey's reconstruction was generously provided for by Robert[38] while Dryburgh's needs seem to have been ignored.[39] Donations were given tto Dryburgh by Walter Stewart, 6th High Steward of Scotland, Bruce's son-in-law, and by various nobles.

Robert the Bruce died in June 1329 and civil strife began in August 1332 as Edward Balliol, son of the ousted King John, returned with an army provided by the disinherited Scottish landowners to claim the crown. Edward Balliol received English support in return for an oath of fealty and cession of the shires of Berwick, Dumfries, Edinburgh, Peebles and Selkirk, including the forests of Ettrick and Jedburgh[40] Edward Balliol could not hold his conquered crown however, and neither could Edward Plantagenet hold the Lowlands, though in July 1335, Edward III and Edward Balliol marched to Perth. In October, Edward III moved to Dryburgh Abbey, but the abbey did not surrender at once.[41][42] Theerafetr, the abbey and the lands hereabouts changed hands several yitimes as the fortunes of ruling families and kingdoms rose and fell.

During 1384 and 1385, Scottish raiding parties moved deep into England forcing Richard II to launch punitive raids, in the course of which Edinburgh was burned.[43] On the way, King Richard ordered the sacking of Dryburgh, Melrose and Newbattle.[44]

The damage caused to Dryburgh was great and influential nobles seemed to have played a significant part in its restoration and re-endowment. In 1443, fire destroyed the abbey, evidently by accident.[45] Eighteen years later in 1461, the abbey is recorded as requesting protection from Pope Pius II inferring that the canons were finding it difficult to finance the repairs.[46]

The abbey lost the patronage of Robert Stewart, Duke of Albany on his death in 1420, and in 1455 with the forfeiture of the lands of the Black Douglases, they lost a major benefactor and protector in James Douglas, 9th Earl of Douglas.[46] The election of Walter Dewer as abbot in 1461 was seemingly the last prelate to be elected by the canons,[47] but it was under his abbacy that alienation of the monastery lands began.[48] The rest of the 15th century was characterised by contests for the abbacy from either indigenous canons and from outside, expulsions, papal refusals or royal intervention.[49]

In 1541, the armies of King Henry VIII marched north in the war of the Rough Wooing. Dryburgh remained untouched until 7 November 1544 when Edward Seymour, Earl of Hertford, burned the town of Dryburgh and its abbey.[50] He returned in 1545 and again set fire to the abbey.[51]

The office of commendator of Dryburgh Abbey had been created by James IV, and it fell in time to the Erskine family. David Erskine took office in 1556, confirmed by the Pope, but this on the eve of the Reformation. He set about alienating the possessions of the abbey by granting lands to important local families, but fell from favour when he took part in the kidnapping of the young King James VI in the Raid of Ruthven.[52] Erskine's was deprived of his lands and the commendatorship of Dryburgh Abbey was given to William Stewart[53][54] Stewart held the commendatorship for just over a year when in 1585 David Erskine found favour once more with James VI and all of his possessions and appellations were reinstated.[55][56]

In June 1600, Erskine wrote to a relative saying that all the canons had now died[57] and marked the ending of the monastery. In 1604, the remaining possessions of the abbey were integrated into the Lordship of Cardross of John Erskine, 2nd Earl of Mar.[58] Henry Erskine, Mar's son received the titular title of commendator of Dryburgh Abbey.[55]

This Abbey is part of five other abbeys and historic sights visited on the Borders Abbeys Way.