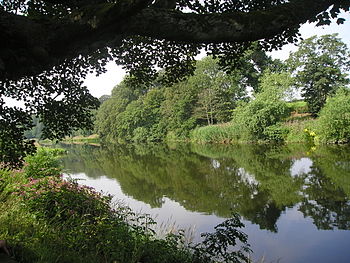 The River Teviot, or Teviot Water is a river of Roxburghshire, whose valley has given an occasional alternative name to that shire: Teviotdale. The Teviot is a tributary of the River Tweed, entering it near Kelso. On its course, it creates in Teviotdale a broad dale of surpassing beauty.

The earliest reference to the Teviot in English is in the Anglo-Saxon Chronicle, as Tefgeta, which is of unknown origin: possibly from the British language.

The Teviot rises in the western foothills of Comb Hill on the border between Roxburghshire and Dumfriesshire. It flows north-eastwards down through Teviotdale 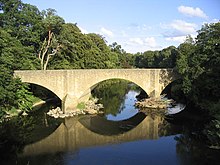 The Teviot passes through Hawick and Lanton, passing the Timpendean Tower and on to the town of Ancrum, then past Harestanes and Monteviot, Nisbet and Roxburgh, before joining the River Tweed to the southwest of Kelso.

A long-distance footpath, the Borders Abbeys Way, keeps close company with the Teviot on its journey to the Tweed.

The principal tributaries of the Teviot are:

Teviotdale has attracted poets since time out of mind, and while it remains unspoilt it ever shall do:

Sweet Teviot! on thy silver tide
The glaring bale-fires blaze no more;
No longer steel-clad warriors ride
Along thy wild and willow'd shore;
Where'er thou wind'st, by dale or hill,
All, all is peaceful, all is still,
As if thy waves, since Time was born,
Since first they roll'd upon the Tweed,
Had only heard the shepherd's reed,
Nor started at the bugle-horn.[1] 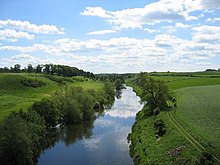