Bute, also known as the Isle of Bute is an island of Buteshire in the lower Firth of Clyde. Its resident population was 7,228 in April 2001. It has but one town, Rothsay, and several picturesque villages.

Farming and tourism are the main industries on the island, along with fishing and forestry. 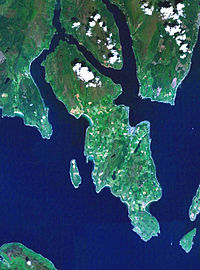 Satellite image of the Isle of Bute

To the west of Bute is the island of Inchmarnock and to the east are Great Cumbrae and Little Cumbrae. Further south lies the great island of Arran

Rothesay is linked by ferry to the mainland. Other villages on the island include:

Bute is divided in two by the Highland Boundary Fault. North of the fault the island is hilly and largely uncultivated with extensive areas of forestry. The highest hill is Kames Hill at 867 ft. To the south of the fault the terrain is smoother and highly cultivated although in the far south is to be found the island's most rugged terrain around Glen Callum. Loch Fad is Bute's largest body of freshwater and runs along the fault line.

The western side of Bute is known for its beaches, many of which enjoy fine views over the Sound of Bute towards the Isle of Arran and Bute's smaller satellite island Inchmarnock. Villages on the western side of the island include Straad, around St. Ninian's Bay, and Kildavanan on Ettrick Bay.

In the north, Bute is separated from the Cowal peninsula by the Kyles of Bute. The northern part of the island is sparsely populated, and the ferry terminal at Rhubodach connects the island to the mainland at Colintraive by the smaller of the island's two ferries. The crossing is one of the shortest, less than 330 yards, and takes only a few minutes but is busy because many tourists prefer the scenic route to the island.

The human occupation of Bute dates from prehistoric times. A female skeleton dubbed "The Queen of the Inch" was found in a cist on the island dated to around 2000 BC. Around her neck was a necklace made of jet.[2]

It is likely that before the Gaels arrived and absorbed Bute into the Cenél Comgall of Dál Riata the island was home to a people who spoke a British (Brythonic) language. Later during the Viking period the island was known as Rothesay, a name deriving from a personal name and Old Norse ey, 'island'. This name eventually came to refer to the main town on the island, which was later also known in Gaelic as Baile Bhòid, (Town of Bute) in the sixteenth century. It was, indeed, the only town on the island.

After the Viking period the island was not granted to the Lord of the Isles, as were most of the islands off Scotland's west coast. Instead Bute became the personal property of the Scottish monarchy. The Prince of Wales bears the title "Duke of Rothsay".

In the 1940s and 1950s Bute served as a large naval headquarters. During the Second World War it housed a large camp for officers and NCOs of the Polish Armed Forces.

Bute is connected with the mainland of Great Britain by two Caledonian MacBrayne ferries:

During summer, the paddle steamer Waverley calls at Rothesay on regular cruises.

There is an ad hoc link too between Glasgow Pacific Quay and Port Bannatyne Marina by Loch Lomond Seaplanes, journey time 17 minutes. [1]

No ferry currently sails between Bute and Buteshire’s other islands

The most successful sporting club on the island is Bute Shinty Club who play at the highest level of shinty (the Marine Harvest Premier League). In 2006 Bute won promotion to the Premier League by winning the South Division One. Bute also won the Ballimore Cup and were runners up in the Glasgow Celtic Society Cup in 2006. Bute also has facilities for football, fishing, rugby, tennis, bowls, and cricket. Petanque is played at Port Bannatyne; boules may be hired from the Post Office there.

The centre for sailing on Bute is at Port Bannatyne with two boatyards and the new marina, and a club which organises private moorings in these particularly protected waters of Kames Bay. Bute Sailing School has its own yacht.

Architectural attractions on the island include the ruined twelfth century St Blane's Chapel on a site associated with St Catan and St Blane, who was born on Bute. Another ruined chapel, dating from the sixth century, lies at St Ninian's Point.

The eccentric Mount Stuart House is often cited as one the world's most impressive neo-Gothic mansions, bringing many architectural students from Glasgow on day-trips. The third Marquess had a passion for art, astrology, mysticism and religion and the house reflects this in the architecture, furnishings and art collection. There is a marble chapel, much stained glass and walls of paintings. The house is open at Easter and from May to October. There are gardens with plants imported from many parts of the world, and a Visitor Centre. The gardens host a number of events throughout the year starting with an Easter Parade. Activities and workshops are often held there in the summer by a local organization that provides after school clubs and activities in the school holidays; there is also a farmers' market and a Christmas market held in the house and in the visitors centre.

The Pavilion is a 1930s edifice housing a concert hall, workshops and café, and noted for its architecture. The Pavilion is little changed from when it was built.

Rothesay Castle was built 800 years ago by the hereditary High Steward of Scotland.

Ascog Hall Fernery and Gardens are a renovated Victorian residence and glass-house containing shrubs and plants from all over the Empire, including a fern believed to be over 1,000 years old.

Loch Fad is a deep freshwater loch stocked with pike and brown trout available to visiting tourist fishermen. Boats are available to hire.

The Old Post Office, now used only for sorting mail, is an historic working post office (open mornings only) which houses artifacts of the early post, some from before the advent of the postage stamp.

Scalpsie Bay has a colony of over 200 seals on its beach, which can only be reached on foot across the fields. The island also has many herds of deer, rich bird life and some large hares. Wild goats with large curled horns may be seen in the north of the island.

Port Bannatyne, a village towards the north of the island, is the centre for sailing and sea-fishing on the island. It has two boat yards and a marina for 200 vessels. Langoustines are fished by creels anchored in the bay. X-Class midget submarines were stationed in Kames Bay during Second World War and there is a memorial to WWII dead. Port Bannatyne Golf Club is known for scenic views from the course.

The road from Port Bannatyne goes seven miles along the shore of the Kyles of Bute until it reaches the minor ferry over to Colintraive on the Argyll mainland.

The 1920s Winter-Gardens (now the "Discovery Centre") close to the Rothesay Pier houses a small cinema and tourist information office. Nearby are the questionably interesting Victorian toilets.

There are a variety of music, folk and poetry festivals, and walking trails and new cycling routes. There are a variety of remote Bronze Age stone circles, an iron-age fortified village, and early Christian remains (including St Blane's Chapel). The Bute Museum of the island's history is behind Rothesay Castle.