Little Cumbrae is an island of Buteshire, lying some half mile south of Great Cumbrae. It is a mile and a half off the Ayrshire coast and a little further from the Isle of Arran to the west.

Little Cumbrae lies half a mile to the south of its larger neighbour, Great Cumbrae. The islands are collectively referred to as "the Cumbraes". In stark contrast to its neighbour though, which is green and fertile, Little Cumbrae is a rough and rocky island. With its many cliffs and rocky outcrops, Little Cumbrae bears more of a resemblance to a Hebridean island than to some of its neighbours in the Clyde.

Today the island's main settlement is at Little Cumbrae House on the eastern shore, facing the Scottish mainland. 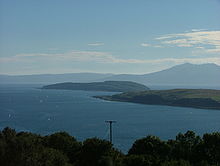 View to Little Cumbrae from the Haylie Brae; Great Cumbrae intruding before and Arran looming behind

The name "Cumbrae" shares the same root as the Welsh Cymry ("Britons"). It appears to be a reference to the old inhabitants of Strathclyde. (The name Cymry, or earlier Cumbrogi is believed to mean 'fellow countrymen', in contradistinction to incoming Gaels and English.) The suffix -ae may be the Norse (or Old English) -eg, meaning "island".

Another theory preferred by the Gaelic school is that the name is from Cill Maura meaning "Church of a female saint".

Robert II is said to have built a castle on the island which was demolished by Cromwell's soldiers in 1653.[2]

In the early 20th century, under the ownership of Evelyn Stuart Parker, a new 'mansion house' was created from the original single storey farmhouse, the gardens were laid out to a plan by Gertrude Jekyll, the renowned garden designer, and substantial repairs were undertaken to the castle and the original lighthouse. The original work commenced in 1913, with subsequent alterations made between 1926 and 1929 when the square tower and top floor were added.

Little Cumbrae was privately purchased in 2003 and there were plans for its development as a memorial park, nature reserve and corporate escape, but the island was sold again in July 2009 for £2 million.[3] The buyers of the island, a millionaire couple of Indian extraction, Sarwan and Sunita Poddar, opened on the island a yoga and meditation centre.[4] There have also been rumours that the new owners planned to rename it "Peace Island", but those have been denied.[5][6]

James Ewing built the first Little Cumbrae lighthouse on the top of Lighthouse Hill in 1757. This was the second lighthouse in Scotland. An open fire was lit at the top of a circular stone tower. Remains of this old structure can still be seen.

The structure now standing as Cumbrae Lighthouse was built in 1793 by Thomas Smith under commission from the Commissioners of the Northern Lights. The lighthouse lies on a broad raised beach on the western shore of the island looking out into the Firth. It had a foghorn, slipway, jetty, and boathouse. The original oil lamps were replaced by argon lamps in 1826 and a solar-powered light was installed in 1974. The 1793 tower has been unused since 1997, with the light on 36-foot hexagonal/cylindrical tower adjacent to the old generator house.