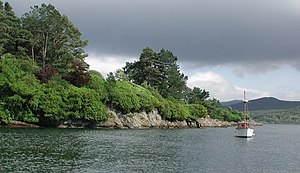 Caladh Harbour on the Kyles of Bute, with the Isle of Bute in the distance

The Kyles of Bute are a narrow sea channel which separates the northern end of the Isle of Bute in Buteshire from the Cowal peninsula of Argyllshire.

The narrowest strait is only some 300 yards across and is spanned by ferry from Rhubodach to Colintraive.

The Kyles are split into the east and west kyles. The east kyle runs from Rothesay Bay north west up to the entrance to Loch Riddon. Here at the northern end of the east kyle are the Burnt Islands and the island of Eilean Dubh. The west kyle runs from here south-west, past the village of Tighnabruaich out to the Sound of Bute.

The Kyles are designated as a National Scenic Area.[1]

This Buteshire article is a stub: help to improve Wikishire by building it up.