Inchmarnock is an uninhabited island of Buteshire lying in the sea to the west of the Isle of Bute, at the northern end of the Sound of Bute. 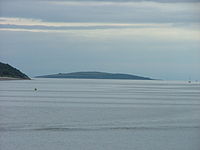 Inchmarnock is around 2 miles long and rises to a height of 197 feet. The island consists mainly of a single ridge running north to south. It is partially wooded and has sea caves at the north and the south and two tiny lochans inland.

The isle is divided into three farms, Southpark, Midpark and Northpark, of which only the latter is currently inhabited. A short reef of drying rocks, Tràigh na h-Uil, skirts the island's west coast.

The island gives its name to Inchmarnock Water, the body of water that lies between the island's western shore and the Kintyre peninsula. Inchmarnock Water connects the Sound of Bute and the Kilbrannan Sound in the south to Loch Fyne and the Kyles of Bute in the north.

At the northern end of the island a Bronze Age cist contains the remains of a female skeleton, the Queen of the Inch. The remains were removed for carbon dating and are now displayed behind a pane of glass in their original position.

The island's name is an Anglicisation of the Gaelic]] Innis Mheàrnaig meaning Island of St Marnock. Marnock (in Old Irish M'Ernóc ("my Little Ernán") was a holy man who, is it said, lived on the island in the 7th century and established a monastery. Alternatively, the name may simply be a dedication to Ernán and reflect the patron saint the monks on the island followed. He has also lent his name to Kilmarnock in Ayrshire, Portmarnock in County Dublin and Dalmarnock, an area in the east end of Glasgow.

The Inchmarnock Project was a study of the archaeology and history of the island from the earliest times down to the Improvements of the late 18th and early 19th centuries. It was undertaken by Headland Archaeology and funded by Lord Smith of Kelvin, the owner of Inchmarnock. Within this long chronology of activity some periods are better represented than others, but the highlight of the project was the excavation in and around the mediæval church which lies in the stack-yard at Midpark.

Excavation to the north of St Marnock's church revealed the remains of what is interpreted as an early monastic enclosure, together with a number of workshops and an exceptional number of pieces of inscribed slate. Provisionally dated to the 8th or 9th century AD, possibly continuing later, this is the largest assemblage of such material known from Scotland. It includes examples of abstract designs and casual graffiti but also what are clearly practice pieces for the composition of more complex designs. As 'pattern books' for the creation of designs in other media, the site potentially offers the opportunity of understanding better the context in which this material was produced. Many of the slates were found in association with debris from metal-working processes.[1]

Literacy at the site was attested by a number of fragments with practice writing, as well as one example with a piece of readable text. There are clear indications that the monks who resided on the island were teaching novices the various skills expected of young monastic scholars. Among the inscriptions are examples of Gaelic, Latin and ogham script. Other inscribed slates from the site provide insights into the dress, weaponry, buildings and ship technology of the time.

The results of the Inchmarnock Project were published by the Society of Antiquaries of Scotland in September 2008.[2]

Two conjoining fragments of incised slate found in the excavations had a particularly interesting series of images. The 'Hostage Stone' comprises a larger fragment and a smaller one, discovered in two separate seasons of excavation not far from each other. Together the piece measures 7 inches by 4½ inches by ½ inch in its current state, although it was perhaps originally slightly bigger and a portion of it may have been lost. On the face of the stone are four human figures, all facing to the right, along with a boat and a number of other miscellaneous marks. In his recent work on the excavation,[2]

Dr Chris Lowe, the project director, indicates there has been extensive discussion on the meaning of this scene and highlights the difference in the stance and attitude of the three figures on the right of the stone compared to the one on the left. The three on the right also appear to be wearing mail armour. In this context the image appears to depict slave-raiding or hostage-taking, with the figure on the left a monk potentially being led away.

An alternative interpretation is put forward by Katherine Forsyth of the University of Glasgow, who suggests that the scene may represent the procession of a reliquary by an ecclesiastical figure, with the armed individuals providing protection. 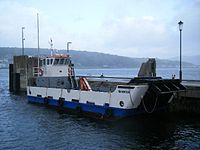 Local legend has it that in the 19th century drunks from Rothesay were left on Inchmarnock to dry out by means of "isolation and deprivation".

During the Second World War, the islanders were evacuated and the island was used for commando training.

Today, Inchmarnock is privately owned and run as an organic farm. The owner, Lord Smith of Kelvin, has introduced a population of organic Highland cattle, employed Headland Archaeology (UK) Ltd to survey the island and has had a new ferry, MV Marnock, built locally (at Ardmaleish on the Isle of Bute) to provide a service to the island.

Inchmarnock is home to the largest colony of herring gulls in the Firth of Clyde and is a wintering ground for greylag geese.[3]