Hume Castle is the heavily modified remnants of a late 12th or early 13th century castle of enceinte at the hamlet of Hume in Berwickshire, between Greenlaw and Kelso,

From its earliest times the castle was a beacon station for warning of invasion from England and the only castle in these shires not destroyed in Robert the Bruce's scorched earth policy put into dramatic effect in 1313.

Hume Castle is a Scheduled Ancient Monument. It is owned by the Hume Castle Preservation Trust, a charitable trust run by the Clan Home Association, and is open to the public. In 1985, the Berwickshire Civic Society, with funds provided by the Scottish Office, began the restoration of the castle walls.

Standing as it does, on an impressive height above its eponymous castleton, it commands fine prospects across the Merse, with views to the Northumberland border at Carter Bar. It had historically been used as a beacon to warn of invasion. Its enormous walls were created in the 18th century but remnants of the central keep and other features can still be seen.

William, grandson of Waltheof, Earl of Dunbar, himself a descendant of the Earls of Northumbria, acquired the lands of Home in the early 13th century, and took his surname from his estate, a common practice of the time. It is assumed that he built the first stone fortifications at the site.

King James II stayed at Home on his way to the siege of Roxburgh Castle, the last English garrison left in Scotland following the mediaeval wars between the two kingdom. It was the King's last house-call; he was killed by an early bombard during the siege.

Local legend tells that the change of the central vowel of the family name, "Home" to "Hume" was a result of an incident during the calamitous Battle of Flodden in 1513. Alexander, 3rd Lord Home led his troops into the fray with his battle cry "A Home! A Home!", and it is said that many of his force thought that he was calling the retreat, and they did indeed go home.

Sixteenth century and the Rough Wooing

In August 1515 John Stewart, Duke of Albany and Regent of Scotland imprisoned members of the Hume family at Dunfermline, with Adam Tinmo, the Constable of Hume Castle. At this time, Albany was planning to bring an army against the Hume family in Berwickshire and had captured Hume Castle. According to a report of Cardinal Wolsey's chaplain, William Frankelayn, Alexander Home, 3rd Lord Home, retook the castle on 26 August, and kept Albany's captain, Lord Fleming's uncle, prisoner. Lord Hume then slighted his own castle, razed the walls, "and dammed the well for ever more." [1]

Before the advent of artillery, Hume castle was considered almost impregnable. However, in 1547 it was captured, during the "Rough Wooing" by the Lord Protector Somerset, continuing the war begun by Henry VIII (who had died in January of that year). Regent Arran had sent 12 arquebusiers to man the castle in August 1547.[2] George Home, 4th Lord Home, was injured at the Battle of Pinkie Clough and his son Alexander captured. After stout resistance by Mariotta (or Marion) Haliburton Lady Home, the castle fell and an English garrison installed. According to an English account, the castle was rendered by the negotiation of Lady Home after the English army encamped nearby at the Hirsel or Hare Craig. Although English artillery was placed to commence bombardment, no shot was fired by either side. Somerset Herald conveyed Lady Home's instructions to the reluctant garrison who would have preferred Lord Home's word. Sir Edward Sutton, described as a cousin of the Earl of Warwick, was made Captain of Hume, and received the keys from Andrew Home, Commendator of Jedburgh and Restennet, on Thursday 22 September 1547. There were seventy-eight Scots within, and Edward Sutton found guns including; 2 batard culverins; a saker; 3 brass falconets; and eight other iron guns.[3] More guns were brought to hold the castle, and an English inventory of 31 December 1547 lists 21 cannons including 4 fowlers, and 40 hand-guns.[4] Minor strengthening work was carried out by the English, on the advice of the military engineer William Ridgeway, but only £734 was spent, the local stone was unsuitable and limestone at Roxburgh too far away.[5]

Mariotta, Lady Home, complained to Somerset on 2 November 1547 that she had, "been very sore examined for the rendering of Hume", and accused of taking money. Her reply was she thought it marvellous that anyone could think she could keep the "sober barmkin" of Hume against the English army, when all the nobles of Scotland could not keep the field.[6] Hume was nearly lost in February 1548, when Captain Pelham travelled to Warkworth Castle to collect pay for the Spanish mercenary garrison. The soldiers planned to rob him and change sides. Loyal members of the garrison fired the beacon and Sir John Ellerker's men arrested the would-be deserters. One was killed escaping, and Grey of Wilton planned to hang six of them, but the two leaders escaped into Scotland.[7]

After the death of his father, captive in the Tower of London, Alexander, the young 5th Lord Home, with the help of his brother Andrew the Commendator, recaptured the castle in December 1548. The first man in was Tulloch, a servant of the laird of Buccleuch.[8] Edward Sutton was blamed for losing the castle by negligence to a night assault. Jean de Beaugué, a French soldier and writer, gave an account of the re-capture. He said that an inside-man let in seven Scots, and at night an eighth man climbed in. These then overwhelmed the garrison. In Jean's account the man who climbed the wall was a Home, aged 60.[9] Sutton was still a prisoner at the end of the war, and the Earl of Shrewsbury was asked to organise his release by the exchange of French hostages.[10]

Mariotta, Lady Home, sent the news to Mary of Guise on 28 December 1548 from Edinburgh. Regent Arran thanked John Hume of Cowdenknowes for his service recovering the castle. The English unsuccessfully attempted to recapture Hume in February 1549.[11] Lady Home was once again installed in the castle in March 1549 and complained to Mary of Guise in March 1549 of the behaviour of the French and Spanish garrison obtaining credit from the villagers.[12] When the English abandoned Thirlestane Castle at Lauder the guns there were dragged by oxen to Hume Castle.[13]

Mary of Guise ordered the people of Sherriffdom of Berwick and Lauderdale to provide 320 oxen to remove the guns from Hume in February 1558. The cannons were taken to the fort at Eyemouth.[14] The castle was again besieged in 1569 by the Earl of Sussex during his raid into Scotland. The defenders capitulated within twelve hours, in awe of his vastly superior firepower and numbers. Regent Morton gave money to Agnes Gray, Lady Home, in the 1570s to keep the castle garrisoned for James VI.[15]

The castle succumbed to the forces of Oliver Cromwell in 1650 during the Wars of the Three Kingdoms. James, 3rd Earl of Home was a prominent member of the Kirk Party, and after Cromwell's successful investiture of Edinburgh Castle, he sent one Colonel Fenwick to beset the Earl's Castle with two regiments. Catherine Morrison, the Lady of Wedderburn, paid £6 to bring cannon to defend Hume.[16] Cockburn, the castle's governor engaged in witty repartee with the Roundheads, but refused to deliver the castle. However once the bombardment began, it became clear that there was no option but submission. Fenwick's troops entered the castle, and accepted Cockburn's surrender. Cockburn and his men retreated and Fenwick slighted the fortification.

Cockburn's witty repartee said the he had no idea who Cromwell was and that the castle stood on a rock. He then sent a note to Fenwick with the following doggerel...

I, Will of the Wastle
Am King of my castle
All the dogs in the town
Shall gare gang me down! 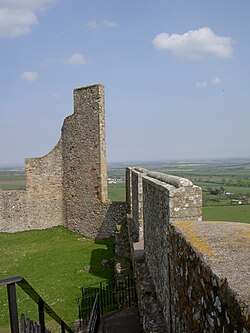 In the early 18th century, Hume and its environs came into the possession of the Earls of Marchmont, wealthier and more influential cadets of the main line of the family. The Castle at this point was level with the ground that it was built upon.

At some point before his death in 1794, Hugh Hume-Campbell, 3rd Earl of Marchmont, 3rd Lord Polwarth, restored the castle as a folly, from the waste left from its destruction, on the original foundations of its curtain wall. He adorned the wall tops with enormous crenellations that are more picturesque than practical.

In light of its function as a mediæval early warning system, the castle was used again as a beacon during the Napoleonic Wars. In 1804, on the night of 31 January, a sergeant of the Berwickshire Volunteers in charge of the beacon mistook charcoal burners' fires on nearby Dirrington Great Law for a warning. Lighting the beacon at Hume Castle, he set in train the lighting of all the Borders beacons to the West, and 3,000 volunteers turned out in what became known as 'The Great Alarm'.[17]

Again, during the Second World War it functioned as a lookout post, and was also to act as a base for resistance in the event of a German invasion.

The castle is still seen as the spiritual home of the many Homes and Humes.

The Castle was bought by the state in 1929, and in 1985 a restoration programme was undertaken by the Berwickshire Civic Society funded by the Scottish Office. It re-opened to the public in 1992. In 2006 The Society handed over the castle to a charitable trust run by the Clan Home Association, under the auspices of Historic Scotland, to maintain its preservation in the future