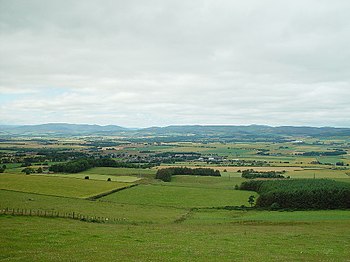 Across the Howe o' the Mearns to Laurencekirk

The Howe o' the Mearns is a low-lying district within Kincardineshire, and into neighbouring Angus. Its name is Scots, and means "Valley of the Mearns".

The traditional name for Kincardineshire from before the Norman times was 'The Mearns', which name has been rendered in Mediæval Latin as Mernia. The name "Kincardineshire" arose after King William the Lion established a royal hunting park at Kincardine and its castle, which became the seat of the sheriff.

The Howe itself is a natural extension of the vale of Strathmore which stretches from around Coupar Angus in a north-easterly direction and following the Highland Line.

The Howe may be reckoned to start at the River North Esk, in the east of Angus, and thence it continues north-easterly through Kincardineshire until it crosses the River Bervie about 7 miles south of Stonehaven. The valley is contained by the Garvock Hills to the east and the grand mountains of the Mounth to the northwest.

This is a fertile vally and economically agriculture dominates as it ever has done. The area is famed for its Old Red Sandstone clay which provide grade -2 soil and are almost fully committed to arable cropping. Seed potatoes are produced for weel-established markets across Britain and as far as North Africa and the Canary Islands.

This is also the largest daffodil area in the north. The Howe has a well-earned reputation for high standards of health in the bulbs, which thus find a ready market in America and Europe. The daffodil fields were a venture was established in the 1950s and it is supported by a local farmer co-operative.

Other main crops in the Howe o' the Mearns are wheat, barley, oats and oil seed rape, with some supplementary production of turnips for the supermarket chains and peas and beans for freezing.

In the last 35 years or so, the Howe o' the Mearns has seen a growth of population, from the towns. As it lies only 30 miles from Aberdeen, the oil capital of Europe, workers attached to that industry have moved into Aberdeenshire and Kincardineshire, and the Howe has proven a most attractive land for a home. It has meant that an area once self-contained now has a population drawn from all over Britain and beyond, expanding the villages and bringing new life and ideas into the Howe.

If residents of longstanding might once have worried about the influx, a mix of onshore and offshore, North Sea and worldwide has had a significant enriching impact on the local culture, and an increase in incomes and opportunities. 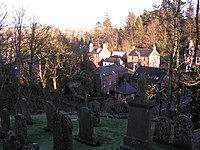 The main villages in the Howe o' the Mearns are: