From Wikishire
(Redirected from Kincardine, Kincardineshire)
Jump to: navigation, search
For other places see Kincardine (disambiguation) 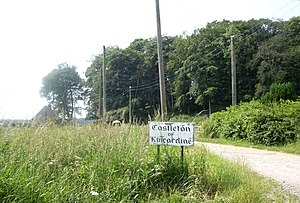 Kincardine was a burgh at the northern edge of the Howe o' the Mearns beneath Strathfinella Hill in Kincardineshire.

The name 'Kincardine' is a commonplace one in the Highland counties. It is a mixed Gaelic and Pictish name: the Gaelic version is Cinn Chàrdainn, which means "The head of the copse", and this includes the Pictish word carden, meaning "copse".

This is the Kincardine which gave its name to the shire, Kincardineshire.

All that remains of the old burgh is a hamlet gathered around the ruins of the castle, known as Castleton of Kincardine. It is found north-east of Fettercairn, close to Mill of Kincardine, which is half a mile to the north and across the burn.

Once a noble castle stood here and its town around it, beside the Devilly Burn, which becomes soon afterwards the Black Burn, a tributary of the Luther Water. This town was the county town and administrative centre of Kincardineshire.

The county town was moved to Stonehaven in 1600 and Kincardine declined and vanished. The market ceased and the old mercat cross was transferred to nearby Fettercairn, where it still stands.

Today the site of the burgh has just a few farm cottages long postdating the disappearance of the town, and the ruins of Kincardine Castle.