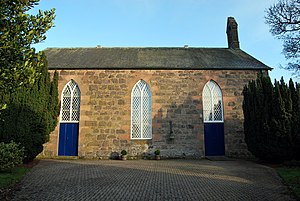 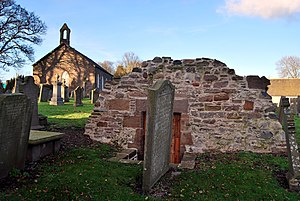 Marykirk is a small village and parish in Kincardineshire, adjacent to the border with the county of Angus at the River North Esk.

The village is approximately six miles north-east of Montrose at the southern end of the Howe of the Mearns. The road bridge carrying the A937 over the River North Esk is a substantial structure with four arches. It was designed by Robert Stevenson and completed in 1815 at the cost of £1,000 replacing the previous route to the village an ancient ford. There is a rail bridge across the same river some 600 yards north of the road bridge and the village once had a rail station to the north-east.

The present parish church was rebuilt in 1806 replacing the previous church the remains of which can be found in the adjacent kirkyard. The older church was dedicated to St Mary and consecrated in 1242 by the Bishop de Bernham. The centre of the village has an ancient market cross. The grand gates to the now demolished mansion Kirktonhill House, built in 1799 for the Taylor family, once the home of oil merchant R W Adamson, can be found still in position (Google Street View). Once boasting many small businesses supporting the surrounding agricultural lands the village now only has a part-time Post Office.

The village also has a small primary school of three teachers with between 30 and 40 pupils as well as a Hotel, the 19th-century coaching House, The Marykirk Hotel. [1] (Google Street View)

Since 1996 the village has held an annual raft race in the River North Esk which normally takes place on the last Sunday in May.

Marykirk was also the site of the world's first electricity-generating wind turbine, built by James Blyth to light his summer residence in the village.[1]

Up until the end of July 2010, the village also had its own amateur weather station [2]