Fordoun (pronounced "For-Dun") is a parish and village in Kincardineshire. Fothirdun (possibly "the lower place"), as it was historically known, was an important area in the Howe o' the Mearns. Fordoun and Auchenblae, together with their immediate districts form the parish of Fordoun with the Parish Church[1] in the vicinity of the original settlement, now absorbed by Auchenblae.

In the 19th Century a railway station was opened approximately three miles to the south-east of Fordoun Church and the original settlement. A village grew at the site of the railway named Fordoun Station (opened in November 1849 and closed in June 1956)[2] where there were also a number of shops, but only a pub and a seasonal farm shop remain.[3] In the time since the founding of the railway station the village formerly known as Fordoun Station has come to be known simply as Fordoun and the site of original settlement has been absorbed by Auchenblae. 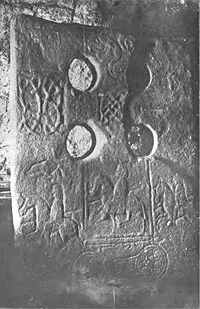 There is a Pictish symbol stone, the Fordoun Stone (also known as St Palladius' Stone), in the parish church on the outskirts of Auchenblae at NO726784[5]

In his 1819 Geography, James Playfair notes that[6]

Fordoun is a mean town, and the seat of a presbytery, noted for being the birthplace or temporary residence of John Fordoun, author of the Scotichronicon; and of Palladius, who was sent by Pope Celestine into Scotland, in the 5th century, to oppose the Pelagian heresy. The chapel of Palladius, adjacent to the church, is 40 by 18 feet; at the corner of the minister's garden there is a well still called Paldy's well; and an Annual fair in the neighbourhood is styled Paldy-fair.

North of the village is a disused airfield that was active during World War II. A two-runway satellite for Peterhead airfield, Fordoun Aerodrome operated from 1942 to 1944.[7]