Fettercairn is a small village and parish in Kincardineshire. It stands to the north-west of Laurencekirk, on the B966 from Edzell. Fettercairn is also reached via the Cairn O' Mount road (B974) from Deeside. The parish extends as far as the River North Esk which here forms the county border with Angus.

The name Fettercairn is from the Gaelic Fothair Chàrdainn meaning "Shelving or terraced slope at the copse"; the name contains a word from the lost Pictish language: carden meaning 'copse'. The same element is found in the name 'Kincardine'.

The shaft of the old 17th-century Kincardine Mercat cross stands in the square, brought here from Kincardine when the latter, the old county town, lost its importance and its market. The cross is notched to show the measurements of a Scottish ell, a standard measure of cloth sold in the market.

The ruins of the long-since-abandoned burgh and royal castle of Kincardine may be found just two miles to the north-east. By the end of the 16th century it had declined to a mere hamlet, being represented now only by the ruins of the royal castle and an ancient burial-ground.

A memorial archway erected in 1864 commemorates the 1861 visit by Queen Victoria and Prince Albert, while staying at Balmoral. 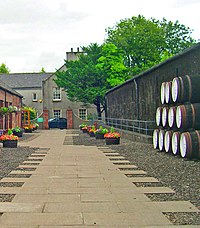 Historically Fettercairn lies at the southern end of the Monboddo Estate, where the philosopher and precursor of evolutionary thought Lord Monboddo lived.