Farnworth is a town in Lancashire's industrialised belt, two miles southeast of Bolton and five miles south-west of Bury.

The townh stands beside the River Irwell and the River Croal. At the 2011 Census, it had a recorded population of 30,271.

The name 'Farnworth' derives from the Old English fearn weorþ an enclosure. Farnworth was recorded as Farneworth and Farnewrth in 1278 and 1279 and as Ffornword in a land survey of 1282.[1]

Farnworth was originally a hamlet in Barton. In the 13th century it was held by the Lords of Barton and Manchester. By 1320 Adam Lever, Richard Hulton and Richard Redford held the manor as tenants. Later the manor was acquired by the Hultons of Over Hulton. In 1666 there were 91 hearths in Farnworth liable to pay tax. The commons were enclosed in 1798. There was a watermill on the River Croal.[1]

The town expanded rapidly in the 18th and 19th centuries around the coal mining industry. The collieries were part of an extensive mine complex, the Worsley Navigable Levels whose underground canals stretched from the Delph at Worsley and linked the mines to the Bridgewater Canal. Other industry included iron foundries and cotton mills.

The owner of Farnworth Paper mills, T. B. Crompton, patented a continuous-drying process which contributed to the mechanisation of papermaking in 1821.

The adjoining open land of Halshaw Moor became an area for recreation for the town, hosting the annual Halshaw Moor Wakes that were described as: 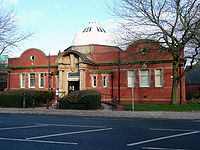 Farnworth's Carnegie Library on Market Street is one of the many Carnegie libraries established by the industrialist and philanthropist Andrew Carnegie. The library was built in 1911 and is constructed of red brick with ashlar sandstone dressings, and flat roofed areas surrounding a central dome. It is designated as a Grade II listed building.[3]

Farnworth Little Theatre, established in 1948, is an amateur theatre group and is situated on Cross Street.[4]

Farnworth has a number of parks and recreation grounds.[7] The largest is Farnworth Park, close to the town centre, has undergone redevelopment as part of Bolton Council's Children's Strategy.[7] There is also Ellesmere Park on the west side of the town centre, Bradford Street Recreation Ground in New Bury, and Doe Hey Playing Fields in Harper Green.[7]

Royal Bolton Hospital (formerly known as the Fishpool Institution, Townleys Hospital, and Bolton General Hospital) is in Farnworth. An Emergency Department was added when Bolton Royal Infirmary in Bolton closed in the early 1990s and moved to the Farnworth site. 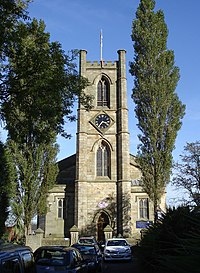