From Wikishire
(Redirected from Holbeach, Lincolnshire)
Jump to: navigation, search

Holbeach is a fenland market town in Lincolnshire, in Holland, the low-lying south-eastern part of the county. The town is eight miles from Spalding and 17 miles from Boston, and 43 miles by road from the county town, Lincoln. The A151 and A17 meet here. The Greenwich Meridian passes through the west of Holbeach. 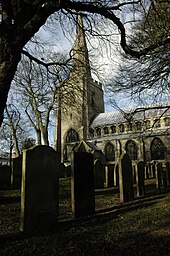 The civil parish of Holbeach is one of the largest by area of all parishes, and extends from the border of Cambridgeshire out to the Wash, measuring 16 miles north to south, and about four miles east to west. The total population of the parish is almost 24,000 with approximately 5,000 in Holbeach town.

Holbeach lends its name also to some of the town’s satellite hamlets in the fens: Holbeach Bank, Holbeach Clough, Holbeach Drove, Holbeach Fen, Holbeach Hurn, Holbeach St Johns, Holbeach St Marks and Holbeach St Matthew. (This repetition of a name for a collection of close-lying villages is quite commonplace in the Fens.) Holbeach itself is the main centre for the fenland around it.

A number of Roman and Romano-British pottery finds have been made in and about the town.[2]

In 1252 Thomas de Moulton, a local baron, was granted a charter for the holding of a market in Holbeach. All Saints' Church was built in the 14th century and the porch, which was built around 1700, probably incorporated parts of de Moulton's ruined castle.[3] The associated All Saints' Hospital, for a warden and fifteen poor persons, was founded by Sir John of Kirton, in 1351. It had ceased to exist before the suppression of chantries and hospitals. The antiquarian William Stukeley reported that his father removed the ruins from the site now occupied by the Chequers Inn.[4]

Until the beginning of the 17th century, the sea came to within 2 miles of the town and there were severe floods recorded in the 13th and 16th centuries. The land drainage programmes that followed moved the coastline of the Wash to 9 miles away, leaving Holbeach surrounded by more than 23,000 acres of reclaimed fertile agricultural land. In 1615, nominees of the Earl of Argyll were entitled to land which was reclaimed from the sea in Wigtoft, Moulton, Whaplode, Holbeach and Tydd St Mary. The Earl paid for the work, but differences of opinion stalled the project after 1634.[5] Further enclosure of marshes were recorded in 1660, in Gedney, Whaplode, Holbeach and Moulton.[6] The work included the building of an embankment, and resulted in 9,798 acres being added to Holbeach parish. A second embankment was built under the provisions of the South Holland Embankment Act (1793), and added another 2,059 acres. Following unsuccessful attempts in the 1830s, the rest of Holbeach Marsh was enclosed in 1840. The project was directed by Mr Millington, and the total area added to the parish by all these enclosures was 12,390 acres.[7]

The Spalding and Norwich Railway, (later incorporated in the Midland and Great Northern Joint Railway), opened Holbeach railway station in 1862. Like the rest of the M&GN route it closed to passengers in 1959 (before the Beeching Axe) and the line closed entirely in 1965.[8]

The 19th century also saw the building of several small churches, including a Wesleyan chapel, built on Chapel Street in 1808,[9] and a Baptist chapel, which was built on Albert Street in 1845 using red brick and colourwashed render.[10]

The Second World War defences constructed at nearby Lawyers Creek comprise a number of pillboxes including the rare Ruck machine gun post.[11]

Much of the economy has been based on food processing and bulb growing. The United Kingdom's largest supplier of tulip and daffodil bulbs is situated to the north of the town and flour milling continues at Barrington Mill.[12]

Local public houses are the Black Bull on Fleet Street, the Chequers Hotel, Horse & Groom and the Mansion House on High Street, the Crown Hotel on West Street and the String of Horses on Boston Road South. The Station Inn, Red Lion and the Exchange have closed.

The Royal Air Force maintains a bombing range, known officially as RAF Holbeach, on salt marshland at the coast of Holbeach parish, near the village of Gedney Drove End. The RAF station is approximately 11 miles north west of Holbeach town centre.

Motorcycle speedway|Speedway racing took place at nearby Bell End. Details of the events are sketchy and some reports suggest the venue had grass-surfaced straights and dirt-surfaced bends. The venue is known to have operated in the immediate post-war era.