Hilton may have a modest population but it is an extensive village with one of Britain's largest village greens, of 27 acres, on which is the famous grass maze: a well cared for and much visited feature.

The Green is surrounded by attractive houses both ancient and modern, and by splendid trees some of which were no doubt planted when Capability Brown was Lord of the Manor.

The parish church is dedicated to St Mary Magdalene and has a peal of six bells.

A fragment of a wall painting on plaster, made for Captain Sparrow (1601–1651), at Park Farm, Hilton, probably around the time of his marriage in 1633, is now in the Victoria & Albert Museum in London. The fragment depicts two figures representing the senses of Taste and Sight and was donated by David Garnett and his wife Angelica Bell of Hilton Hall, who were members of the Bloomsbury Group.

On the village green is a turf maze (or labyrinth) some 55 feet in diameter.

The maze was cut in 1660 by William Sparrow, who is remembered by the monument at the centre of his handiwork; a stone pillar at the centre of the maze. The pillar records that the maze was cut by William Sparrow in 1660 (when he would have been 19). The Latin inscriptions, above and below a coat of arms (presumably Sparrow's), reads "Sic transit gloria mundi" ("Thus the glory of the world passes away") "Gvlielmvs Sparrow, Gen., natvs ano. 1641. Aetatis svi 88 qvamdo obiit, hos gyros fornavit anno 1660" ("William Sparrow, Gentleman, born in the year 1641. Aged 88 when he died, he formed these circles in the year 1660"). The English one reads "William Sparrow departed this life the 25th August, Anno Domini 1729, aged 88 years". 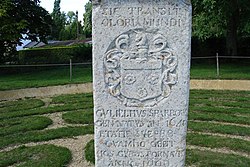 Latin inscription on the central pillar of Hilton turf maze

The design of the maze is similar to the famous pavement labyrinth at Chartres Cathedral, laid in 1235. An illustration by W H Matthews in his "Mazes and Labyrinths" (1922) shows several paths leading to the central circle: the erection of the pillar at its centre, some 69 years after it had been cut, could have confused the design, or the paths may simply have become overgrown. Recent maintenance has made the maze conform to the standard mediæval pattern.

It has been suggested that the young Sparrow might have recut the maze on the site of an earlier one which had become indistinct from lack of maintenance. There is no evidence to support this theory, but the dating of turf mazes is notoriously difficult. A turf maze of similar design, in the nearby village of Comberton, was called "the Mazles". It no longer exists. 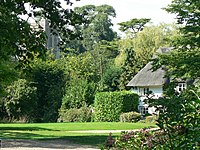