Papworth Everard is a little village in Cambridgeshire, at the very edge of the county, beside the Huntingdonshire border. The village built along the line of the A1198 which is the route of an ancient road, the Roman Ermine Street, the old North Road which for centuries served as a major artery from London to York.

The village is to be found ten miles west of Cambridge and six miles south of Huntingdon, which is reached directly up the road. A bypass now means that most traffic can avoid Ermine Street, and it is comprehensively traffic-calmed.

Today, Papworth Everard is a large village with a thriving community, home to substantial light industry and local business. It is also the centre for the Papworth Trust, a charity which offers housing and training to the disabled, and Papworth Hospital, renowned in the field of cardiology. 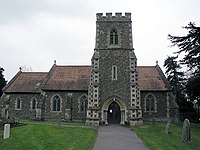 The name of Papworth is Old English, suggested as meaning "Papa's enclosure" after an otherwise unknown founder. It is found as Papeworde in the Domeday Book. The same name is found in Papworth St Agnes and Papley Grove.

Following the Norman Conquest of 1066 the village and land of Papworth were granted by the new king to a Norman knight, Everard De Beche, from whose name the second element of the village's name is derived.

Papworth Everard has a King George's Field in memorial to King George V. Adjacent to the playing fields are a bowling green and a series of all-weather, floodlit tennis courts. The village also has an open-air paddling pool in its park.

Papworth Everard is served by a variety of local services, primarily based in the central location of Pendrill Court, between Chequers Lane and Ermine Street. This area is adjacent to the playing fields and so provides a central hub for the village. In addition to a combined pharmacy and doctors' surgery, the village centre has a range of little local shops; a convenience store with a Post Office, a veterinary surgery, a coffee shop, hairdresser and chip shop and a library.