Fenstanton is a village in Huntingdonshire standing on the south bank of the Great Ouse. It is in the east of the county, nestling close to the border with Cambridgeshire and a large and still growing village.

The village lies two miles south of St Ives, across the water meadows of the river, the Great Ouse. Hemingford Grey is close by. Less peacefully, the A14 Cambridge Road rushes past the southern edge of Fenstanton.

Although extended by much modern housing, Fenstanton retains buildings of the Stuart and Georgian periods. On one of its four Greens is the ancient village "lock-up" (not in regular use), a 17th Century structure with a clock on the east wall.

The mediæval church has a fine 14th Century chancel, on the north wall of which is an impressive memorial to Capability Brown and his family, he and his wife being buried in the churchyard. He was Lord of the Manor of Fenstanton and Hilton.

Around the village are well maintained and well used public footpaths into the countryside.

Fenstanton is on the Via Devana, the Roman road that linked the army camps at Godmanchester and Cambridge. Fenstanton was the site of a Roman villa, and it is speculated that the posiotn would have been designed to keep the Britons in order after their attack on the forces of the IX Legion Hispana as they retreated from an ambush at Cambridge by Boadicea's tribesmen.[3]

The inhabitants of Fenstanton again saw action when they rose in support of Hereward the Wake. From his stronghold on the Isle of Ely Hereward led resistance against the Normans causing King William to assemble a force in Cambridge to deal with the problem. Men were summoned from Huntingdon but they did not pass Fenstanton and escaped with their lives only by swimming across the river.[3] 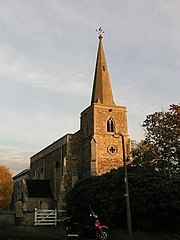 The parish church of St Peter and St Paul dates from the 13th century, though there was an earlier church on the site listed in the Domesday Survey.

The octagonal spire on the west tower dates from the 14th century, and the church is noted for its chancel, built by 14th century rector William de Longthorne. The east window, 17 feet in width, is impressive for a church of its size. The five bells date from the 17th and 18th century.[1]

The village also has both a Baptist and a United Reformed Church.

The village is the ancestral home of John Howland, one of the "Pilgrim Fathers" who sailed on the Mayflower to begin their colony in New England in 1620. Visitors from America have given the church a bell in his memory.

In the 18th century Lancelot "Capability" Brown, the famous landscape gardener, bought the Lordship of the Manor of Fenstanton and Hilton from the Earl of Northampton. Brown and his wife are buried in the parish churchyard and the chancel bears a memorial to them.

There is a post office, as well as a primary school, shared with neighbouring Hilton.

Fenstanton is the current operating base of Stagecoach in Huntingdonshire.