Hemingford Grey is a village in Huntingdonshire on the south bank of the Great Ouse. It is now much the larger of the two Hemingford villages and its houses extend south and east from the historic village centre, without spoiling the charm of the village core.

The old village centre has great charm with several 18th and 19th Century houses. At the end of the High Street is the Norman Manor House, which was restored by the children's writer, Lucy Boston, and is open to the public by prior arrangement.

The Glebe is a 16th Century half-timbered, thatched building, whilst the beautiful mediæval church, with its unique truncated spire, is close to the river bank at the end of Church Street.

The Hemingford Grey Study Centre occupies the lovely Queen Anne House which was once the vicarage.

Further out at the very edge of the parish boundary along London Road are industrial developments, and the handsome building which once housed St Ives workhouse has been converted for residential use.

Hemingford Grey stands on the south bank of the River Great Ouse; opposite the village on the north bank is the flood meadow. A little outside the village though is the famous mediæval bridge across to St Ives; the town bridge with its bridge chapel. On the Hemingford side a hamlet has grown up, separated from the main village by the meadows. Here are sought-after riverside houses and a pair of hostelries.

The village adjoins Hemingford Abbots just half a mile to the west and St Ives across the flood on the north. The A14 trunk road passes through the parish about a mile south of the village itself. 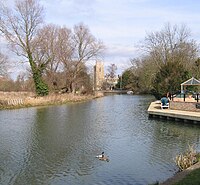 St James' Church, alongside the Ouse

With no church listed in the Domesday Book, it is believe the church was first built in the first half of the twelfth century by Payn of Hemingford, a tenant of Ramsey Abbey, and was enlarged over the following centuries. Parts of the mediæval church still survive in the south aisle and nave.

The spire collapsed during a hurricane in 1741 and instead of being rebuilt was replaced with eight ball finials at its base.[1]

In Anglo-Saxon times the neighbouring villages of Hemingford Grey and Hemingford Abbots were a single estate. In the ninth century they were split into two. In 1066 "Little Hemingford", as it was known, was acquired by Ramsey Abbey. In around 1140 Payn of Hemingford began the construction of Hemingford Manor, which still stands and may be the oldest inhabited building in Britain. He also built the present church.

The manor was then owned by the Turberville family who for a while gave their name to the village.[1][2]

In 1276 the village was given its present name by the de Grey family. The manor remained in the possession of the Greys until seized by Henry VII in the fifteenth century after George Grey, 2nd Earl of Kent was unable to settle his debts. The manor was subsequently leased to a number of people, including the great-grandfather of Oliver Cromwell.

Listed as Emingeforde in the Domesday Book, the name Hemingford means "Hemma's clan's ford" (Hemmingaford), where Hemma is believed to be the name of an early English chieftain.[1] The village was at different times known as East Hemingeford (11th century), Hamicheford (12th), Hemmingeforde Turbervill (13th-14th), Hemmingeforde Parva (13th-14th) and Hemingford Priors (14th-15th).[2]

Hemingford Grey grew considerably in the 19th century especially in the area of the London Road which is about a mile east of the village centre and nearer to St Ives. Here there has been some industrial development, a petrol station and the St Ives Motel. The village continued to grow between the wars when simple and attractive bungalows with good- sized gardens were built followed, in more recent years, by several small estate developments.

The centre of the village has an attractive mixture of buildings including thatched timber-framed cottages and the church with its unique truncated spire. Along the riverside path is the Norman Manor House 'The Manor', claimed to be the oldest inhabited house in the United Kingdom, where Lucy Boston the children's writer lived and which is open to the public by prior arrangement.

The village is home to a village shop, a primary school, and The Cock public house. The post office closed in 2003, but there is a post office run from St James' Parish Centre. The 19th century Reading Room is still used for community meetings.[1]

Hemingford Grey is a vibrant community with many and varied voluntary organisations providing recreation, education and sporting facilities for residents.

Hemingfords' Regatta is held annually with the adjoining village of Hemingford Abbots as it has been since 1901. It is believed to be among the oldest village regattas in the country.[3]

Farming is still the main land-use with large arable fields to the south and meadows on the low ground near the river. There is limited employment in the village but in recent years there has been a considerable increase in the number of people working from home. This has led to many services being available in the village.