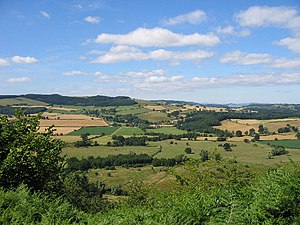 The Herefordshire Trail is a long-distance footpath forming a circular walk in Herefordshire 154 miles long, with its conventional starting and finishing point at Ledbury.

The Herefordshire Trail runs for 154 miles. It has been designed to link the county's five market towns: Leominster, Bromyard, Ledbury, Ross-on-Wye and Kington, but also taking in many of the smallest villages which are the hidden gems of the area, such as Kilpeck and Leintwardine.

The route encompasses historic churches and inns. The terrain varies from panoramic views at Harley's Mountain (1,234 feet, the highest point), Garway Hill Common (1,201 feet), and Merbach Hill (1,043 feet), and the hidden Golden Valley below the looming bulk of the Black Mountains, to the river valleys and Black and white villages trail passing through cider orchards and many of the lesser-known hidden places in the secret corners of this quiet county.

Other ponts of interest include the ruined Wilton Castle at Ross-on-Wye, the wooden toll bridge at Whitney-on-Wye, the 1895 Louis Harper pedestrian suspension bridge at Sellack Boat, Arthur's Stone tomb near Dorstone, the sculpted hedges at Brampton Bryan, and the short Kingfisher Line railway (the Leominster and Kington Railway) near Titley.